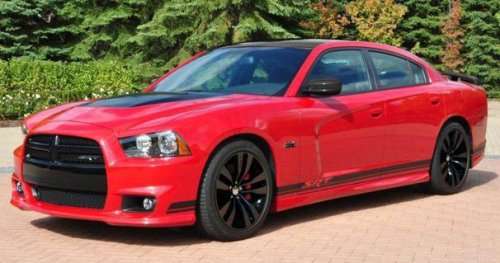 Today at the Spring Festival of LXs in Irvine California, Chrysler’s Street and Racing Technology group debuted their newest offering in the form of the SRT Charger 392 – a limited edition appearance package based on the high performance Charger SRT8.
Advertisement

The SRT Charger 392 is a new appearance package, packing the same 470 horsepower, 6.4L Hemi V8 found in other current SRT Charger sedans but this is the first Charger to carry the special “392” moniker that debuted on the Dodge Challenger 392 in 2011.

“It’s a cool package,” said Trostle. “When you think of old school muscle cars, you think of black accents and this car kind of handles that in a new way. Not the whole hood is black, just a portion of it and we’ve done it in gloss black versus a matte black. It definitely has a presence to it.”

The Charger 392 features unique black trim on the hood and roof along with a black rear wing, black exterior mirrors and a black SRT stripe running the length of the body. Capping off the new appearance package is a set of Black Vapor Chrome wheels and a 392 badge on the front fenders. Inside, we can expect that the limited edition SRT Charger 392 will have a serialized dash plaque along with a loaded up SRT interior and perhaps some unique stitch work or something else to allow the interior of the Charger 392 package to stand apart from the “normal” Charger SRT8.

“The stripe and decal complement the black on the upper side of the car really well and ties into the black on the wheels,” said Trostle. “It creates a really cool look. Plus, it has the badging of SRT on the side as well.”

While the new SRT Charger 392 appearance package debuted in TorRed with all of those sexy black accessories, SRT will also offer this limited edition package in Bright White, Billet Silver, Plum Crazy and Hemi Orange. Like the original Dodge Challenger SRT 392, the SRT Charger 392 will be limited to just 392 production units. Pricing has not been announced but considering that this package is really just a bunch of black trim (albeit awesome looking) on a standard Charger SRT8, the price shouldn’t be too much higher than that of the basic 2013 Charger SRT8. SRT expects to begin rolling these models out to showrooms later this year – although no exact timetable has been announced.

While the SRT Charger 392 isn’t the type vehicle debut that many Mopar faithful had been hoping for, limited edition appearance packages like this one have historically done very well on the Dodge Charger. Aside from the new Charger SRT Core package, offerings like the Charger R/T-based Daytona and the Charger SRT8-based Super Bee package have been offered up – and quickly snatched up – in limited numbers over the past few years.

Even though the new SRT Charger 392 limited edition package doesn’t have any sort of performance improvement compared to the current Charger SRT8, there is no question that the khaki-clad soccerdads at the LX Spring Festival will respond very well to a new limited production appearance package. Considering that the majority of the LX crowd thrives on simple appearance upgrades, the SRT Charger 392 does much of their “modification” work for them. The only way that this new package could have better appealed to the LX crowd is if it came with LED underbody lights, an air ride suspension system and TVs mounted throughout the cabin AND the trunk.

Regardless of the lack of street cred among the majority of the “hardcore” LX owners, the new SRT Charger 392 should help stoke the embers under the consumer market for the 470 horsepower super sedan as it heads into what could be the final model year before an expected refresh for 2014. It isn’t any faster than the current Charger SRT8 but there is no question that the Charger 392 package is a great looking design.