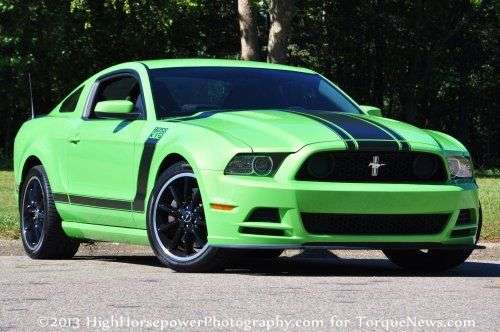 Last week we brought the news broken by Edmunds that the 2015 Ford Mustang would offer an EcoBoost 4-cylinder base model engine strictly for the European market – a fact that has since been debunked by the folks at Road & Track who have painted the future of a turbocharged 4-cylinder Mustang in a much more positive light for American enthusiasts.
Advertisement

According to Edmunds report from Geneva, the redesigned 2015 Ford Mustang will be offered with the turbocharged 4-cylinder EcoBoost engine that many expected but rather than being a performance engine with a touch less horsepower than the Mustang GT, the European EcoBoost Mustang would replace the 3.7L V6 that serves as the base motor here in the US. This engine could offer similar horsepower to that produced by the current V6 while achieving better fuel economy and lower tailpipe emissions…which would in turn cut back on the costs associated with inefficient sports cars in Europe. Edmunds also reported that the new 2.3L EcoBoost engine would be offered specifically for the Europe market and American buyers would not get a shot at this efficient new turbocharged muscle car. Click here for a closer look at the bad news from Edmunds that we reviewed last week.

According to Road & Track, who went so far as to call our Edmunds for their report for being incorrect, it has been confirmed that the 2015 Ford Mustang EcoBoost model will indeed be offered in the United States. Also in contrast to the Edmunds report, Road & Track stated that the 2.3L EcoBoost 4-cylinder engine will not be a base model…instead ranging somewhere between the 305 horsepower base V6 Mustang and the 420 horsepower Mustang GT. This is obviously much better news for those prospective Mustang owners around the US who are hoping to have an efficient yet powerful EcoBoost powered Mustang when the next generation is unveiled sometime in the next year or so.

Since Bill Ford Jr. made a comment last February about how all of the Ford products would soon have an EcoBoost engine option – even the mighty Mustang – high performance Ford fans have been eagerly waiting for a factory turbocharged Mustang. Some believed that the 2015 Mustang would pack the 3.5L EcoBoost V6 from the current Taurus SHO while others expected a turbocharged 4-cylinder EcoBoost Mustang that would effectively reincarnate the Turbo GT or SVO packages from the 1980s.

Early on when these EcoBoost’d Mustang discussions kicked up, it seemed more likely that Ford would use the 3.5L EcoBoost from the Taurus as it is a well proven performance engine and with an output of 365 horsepower, it would fit perfectly between the 305 horsepower base V6 and the 420 horsepower 5.0L in the Mustang GT. Those beliefs shifted a bit when Ford introduced the Focus ST with the first global EcoBoost performance application of the EcoBoost, as it became very clear at that point that the Motor Company could build an efficient, high performance EcoBoost 4-cylinder. Over time, more rumors surfaced about how Ford was planning a larger EcoBoost 4-cylinder measuring 2.3L that would offer more power than the 252 ponies packed by the Focus ST engine.

When the Edmunds report came out indicating that there was indeed a 2.3L EcoBoost engine coming with the introduction of the 2015 Ford Mustang, the facts all seemed to be there to support all of the rumors and speculation from the past year or so. It looked like the Mustang Turbo GT or Mustang SVO would be returning to dealerships but Edmunds’ report that the EcoBoost’d Mustang would not be sold in the US came as a heavy blow to the Mustang enthusiast community. Luckily, the folks at Road & Track have much more positive news for the future of the 4-cylinder EcoBoost Mustang - be it Turbo GT, SVO or simply coming with a new trimline name playing off of the EcoBoost engine option.

Unfortunately, Ford Motor Company has not offered one shred of official information on the future existence of a 2015 Ford Mustang powered by a 4-cyinder EcoBoost engine. Because of that, you can either believe Edmunds and expect that the EcoBoost Mustang will only be used in Europe where it will replace the V6 engine that we use in the US or you can believe Road & Track and expect that the EcoBoost Mustang will indeed sit between the 3.7L V6 and the 5.0L V8 here in the US.

Due to Ford’s push for global product offerings that are similar in all markets, I am more inclined to agree with Road & Track but that could just be the automotive romantic in me hoping to see a new 350-ish horsepower 2015 Ford Mustang SVO. The next generation Mustang (riding on the new S550 platform) should arrive – at least in concept form – within the next year so it will likely be quite a bit of time before we have official information to support either of the arguments about the existence of the EcoBoost Mustang.