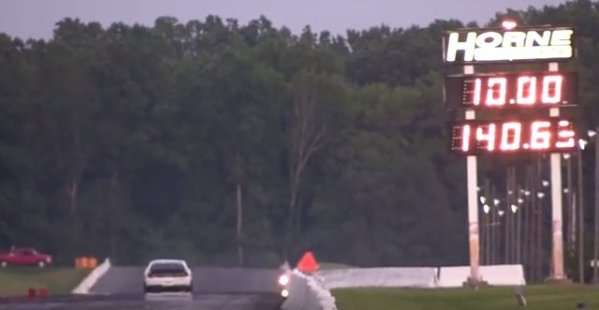 A new claim has been posted online for the quickest Dodge Challenger SRT Hellcat on the quarter mile, with this latest record setting muscle car laying down an awesome 10.008 run with a fairly short modification list – but we are still without a 9 second quarter mile Hellcat run.
Advertisement

The race is on to see which 2015 Dodge Challenger SRT Hellcat can be the first to break into the 9 second quarter mile range, and while we have another record to announce today, there has still been no video proof of a Hellcat car in the 9s. However, this white Challenger from Pennsylvania is the closet thus far, running an awesome 10.008 at 140+ miles per hour with a fairly short modification list.

The 10.008 Hellcat Challenger
This 2015 Dodge Challenger SRT Hellcat has a handful of modifications that allow it to make 908 rear wheel horsepower and 930lb-ft of rear wheel torque. The mod list includes American Racing headers, a full high flow exhaust system, an AFE cold air intake, a 10% overdrive crank pulley, a 150 horsepower nitrous setup and a tune with Q16 race gas. It also has some big, sticky tires and while not mentioned or shown, I would guess that it has a stronger driveshaft than what came stock.

The video shows three runs, starting off with a 10.33 pass at 136 miles per hour for the bottled Hellcat Challenger, which isn’t bad – but it is far from record setting. However, once the sun went down, the times went with it. On the 2nd run, the Hellcat Challenger clearly launches much harder and it gets away in a rush, blasting down the track and setting what I believe to be the record for the quickest Hellcat Challenger thus far. He ran a 10.008 at 140.63 miles per hour, leaving this Hellcat Challenger just 8 thousandths of a second short of the 9 second range.

How short is 8 thousandths of a second? On average, it takes you about a tenth of a second to blink. 8 thousandths of a second is as little as a slight tail wind for a few feet during the run or a slight difference in traction that isn’t detectable with even the best cameras in the world. In other words, this car is capable of running in the 9s and if nothing else, we will see the 9 second barrier shattered once the temperatures drop this fall. Right now, the guys driving their Hellcat Challengers to chase the record are all running in summer heat and humidity. When the air gets cooler and dryer, we are certain to see some amazing times from these lightly modification Hellcat Challengers.

In the meantime, crank up your speakers and enjoy this video showing the world’s quickest Hellcat Challenger setting the record at 10.008.