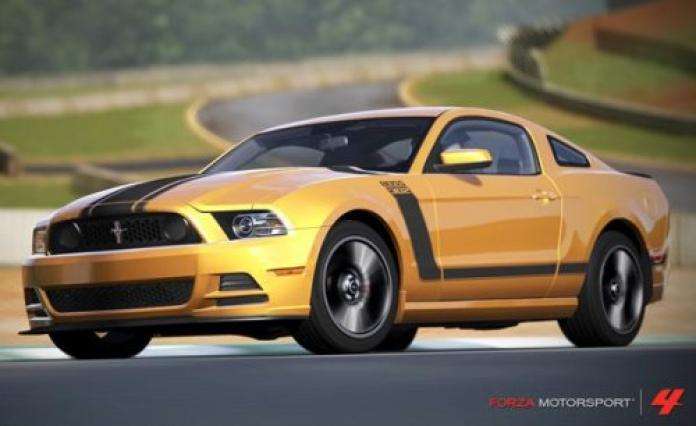 The folks at Turn 10 Studios have announced the 10 new vehicles included in the August car pack and at long last, the new Mustang Boss 302 and the Camaro ZL1 are coming to Forza 4 – along with a spread of other cars including the new Scion FR-S, the new Hyundai Genesis Coupe and the 2013 Lexus GS350 F Sport.
Advertisement

Over the past few months, I have been griping that Forza Motorsport 4 car packs included some pretty odd choices for a road racing game (like the Jeep Wrangler Rubicon) while other models that would seemingly fit right into the world of Forza 4 have been excluded – mostly the new Ford Mustang Boss 302 and the 2012 Chevrolet Camaro ZL1. However, those complaints will be squashed early next month when the August Car Pack for Forza Motorsport 4 brings ten new cars to the legendary driving simulator including the new Boss 302, the Camaro ZL1 and some other modern performance cars that belong on the tracks of FM4.

While the 2013 Ford Mustang Boss 302 and the 2012 Chevrolet Camaro ZL1 are likely to be the most popular models among the Forza 4 August Car Pack, the 2013 Hyundai Genesis Coupe 3.8 Track, the 2013 Scion FR-S and the 2013 Lexus GS350 F Sport bring modern performance to FM4 in a very different way than the mighty Mustang and Camaro. Having had the pleasure to drive all three of those cars in the real world in high performance settings, I am pleased to see these models arrive in the virtual Forza dealerships.

The Genesis Coupe and Scion FR-S will bring a pair of lightweight rear wheel drive performance cars to the table that will allow “import performance fans” to battle online with those gamers piloting the Detroit Big 3 muscle cars and the new Lexus GS 350 F Sport packs 306 horsepower, taking aim at the other luxury performance models. If the Genesis Coupe and FR-S are as solid on Forza 4 as they are in the real world – I expect them to become popular models in the class-leading driving simulator.

In addition to those five modern performance vehicles, the August Car Pack includes a group of five classic vehicles spanning 4 different decades with very different styles. First, the August Car Pack for FM4 offers a pair of 1962 models with the ’62 Lincoln Continental and the Triumph TR3B which are just about as far apart on the automotive spectrum as you can get. The Continental packs a 430 cubic inch V8 while the Triumph is powered by a 105 horsepower 4-cylinder…and the TR3B would probably fit in the trunk of the classic Lincoln.

Next, the FM4 August Car Pack offers the 1984 Peugeot 205 T16 for rally lovers while fans of classic LeMans racing should be excited to see the 1989 Mercedes Benz #63 Sauber-Mercedes Racing C9. Last but certainly not least is the 2003 Aston Martin DB7 Zagato which is likely making an appearance thanks to the re-emergence of the Zagato name with the new Aston Martin Zagato supercar.

The August Car Pack for Forza Motorsport 4 hits the Xbox Live Marketplace on August 7th and will cost 560 Microsoft point ($7 US Dollars). In addition to the new vehicles, I would expect to see at least one (if not more) monthly Rivals event that specifically features these new models. I wouldn’t be surprised to see an event pitting the Hyundai Genesis Coupe against the Scion FR-S in a drift battle similar to the one shown in the official video below. You can check out my favorite models from the August Car Pack in the gallery on the right, all of which are courtesy of ForzaMotorsport.net.