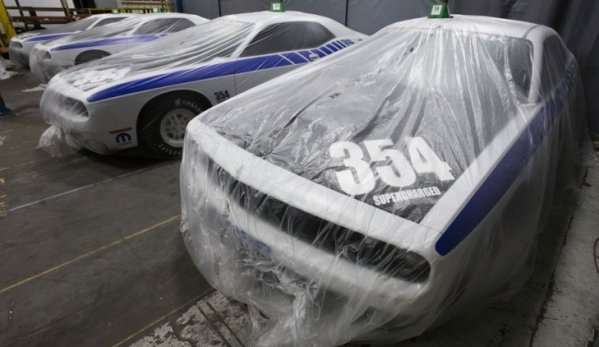 The newest Mopar Challenger Drag Pak is likely to be the quickest thanks to a new supercharged engine package, so it should come as no surprise that the new factory drag cars are already all spoken for by dealerships around the country – but there is still a chance of getting one if you have deep enough pockets.
Advertisement

During a media event last summer at their Chelsea Proving Grounds, the Chrysler Group introduced the newest Dodge Challenger Drag Pak from Mopar. The new Challenger Drag Pak sports the exterior styling of the 2015+ muscle cars and while the drag race Challenger doesn’t get the Hellcat Hemi – it does feature a new supercharged Hemi measuring 354 cubic inches (the Hellcat is 378 cubic inches) or a naturally aspirated 426 cubic inch Hemi. The new Drag Pak Challenger is expected to be the quickest of all of the Mopar race-ready Challengers and, not surprisingly, that has led to a great deal of interest in the newest Drag Pak.

Unfortunately, the newest Mopar Drag Pak follows the trends of the other factory drag racing packages like the new Ford Mustang Cobra Jet and the new Chevrolet Camaro COPO with having very limited production numbers. Mopar planned to build just 60 examples of the Challenger Drag Pak and all 60 of those high performance muscle cars have been ordered by dealerships around the country. In other words, it is no longer possible to order a Mopar Challenger Drag Pak, but there is still a chance of finding one sitting at a dealership around the country.

Mopar Challenger Drag Pak Production
As mentioned, there were 60 examples of the new Mopar Challenger Drag Pak built with either the supercharged 354 cubic inch Hemi or the naturally aspirated 426 cubic inch Hemi – with 35 examples of the Drag Pak Challenger packing the blown Hemi while the other 25 are fitted with the 426 Hemi. There are no official power figures for either of these engine packages, since output varies based on the tuning efforts of each individual car, but we know that the first new Drag Pak car to run at the Gatornationals last month was making somewhere in the area of 1,200 horsepower. That supercharged Challenger is running in the 8.50-8.60 range in the quarter mile, trailing the class winning Mustang by just over a tenth in the first official competition for the newest Mopar Challenger race car.

Regardless of the engine chosen, all of the new Mopar Challenger Drag Pak cars have a 3-speed automatic transmission built for drag racing, a lightweight braking system, a suspension system optimized for weight transfer and traction, and an entire that is stripped down to the bare essentials.

These Challengers are not street legal, as they come with serial numbers rather than VIN numbers, so they cannot be registered in the United States.

The new Challenger Drag Pak with the 426 Hemi has an MSRP of $99,426 while the supercharged 354 Drag Pak will set you back $109,354. Of course, those are suggested retail prices and with these cars being so limited, any cars available at dealers around the country may have a markup added. Since all of the cars have been ordered, the only chance to get one brand new lies in your ability to find a dealership with one for sale, but I would bet that with enough hunting, there has to be at least one left available somewhere in the US.