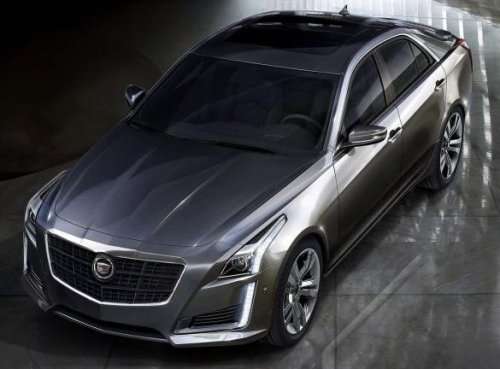 While the mysterious images of the 2014 Cadillac CTS that we showed you yesterday offered a look at many of the features of the new luxury sedan – today we get a look at pretty much the entire car both inside and out.
Advertisement

Yesterday morning, a handful of pictures of the all new 2014 Cadillac CTS arrived on the internet but those shots were all tightly cropped shots that looked more like official teaser images than they did leaked pictures that the automaker wouldn’t want us to see yet. That is not at all the case with today’s pictures as we get a look at the full driver’s side, a better look at the back end, a new high angle shot of the whole car, two new interior shots and a head-on shot of the front end showing almost the entire nose of the 2014 CTS. Not surprisingly, these six new shots confirm what we thought after seeing the first five pictures yesterday…that the 2014 Cadillac CTS is one great looking luxury sedan inside and out. Click here to see yesterday’s leaked images of the new CTS if you missed them.

While the front and rear end shots of the 2014 Cadillac CTS that we brought you yesterday left very little to the imagination in terms of the fine details of the super sporty, high tech front end – today’s shots reveal quite a bit about the redesigned midsized luxury sedan. The most significant feature of the CTS that was not clear yesterday was the longish design of the new luxury sedan, especially noticeable from the side. The long “bonnet” area in front of the windshield leads to cabin that looks to be set back a bit while the back glass flows so quickly through the short trunk that the 2014 CTS almost has a fastback design. This long front end seems to offer a very subtle version of the long front end design that we have seen on the Cadillac Ciel Concept – which also has LEDs lining the outer front corners although the Ciel didn’t have the break through the center of the front fascia. Also, the lines running through the body side combined with the fastback style stance of the 2014 CTS give the car a rakish look…like an angry cat waiting to pounce. There wasn’t much that we couldn’t see of the front end in yesterday’s leaded CTS pictures but these new pictures verify that the 2014 CTS indeed has vastly more aggressive front fascia that will allow the midsized Caddy to stand out in the luxury sedan segment.

As an interesting note, one these new shots of the 2014 Cadillac CTS show the luxury sedan wearing very different wheels than those we saw yesterday or in the rest of the leaked images today. In addition to those split spoke rims that we saw yesterday, the CTS will also wear 10 spoke chrome rims that seem far more fitting of the luxury segment. Kind of makes us wonder if those split spoke rims might be for a performance package of some sort…like a new CTS-V? Also, like the Cadillac XTS, the next generation CTS will have chrome exhaust openings integrated into the lower portion of the rear fascia but the CTS differentiates itself with wider LED taillights than the range topping XTS.

Finally, these latest leaked images of the 2014 Cadillac CTS show the interior from two different angles and they both confirm what we saw in the leaked image yesterday showing the passenger side door panel. This includes tons of leather across the dash with contrasting stitching accompanied by more low gloss, natural looking wood trim and, of course, plush leather seats. We also get a look at the new CTS sedan’s gauge cluster that looks as though it might be a large thin film transistor (TFT) panel with an RPM range ending at 6,500rpm and a speedometer that reaches 160 miles per hour. As can be expected, the steering wheel has lots of controls mounted on the spokes for the cruise control and infotainment system along with paddle shifters (yea!) while the sloping center stack holds a large touchscreen with the Cadillac CUE system will what appears to be a panel of touch sensitive buttons mounted below the large screen in the sharply sloping console. One other fine detail that we see in the interior shots is the automatic shift level with the standard PRND options but the M on top of the shifter suggests that there will be a separate sport shift mode to make the most of the paddle shifters. Finally, just behind the shifter in the center console is a traction control button and a “mode” button that will likely include driver selectable drive modes that will make the CTS more fun or more comfortable – depending on what the situations demands. This will allow the CTS to be even more fun, especially when fitted with the new 420 horsepower twin turbo V6. Click here for more on the new twin turbocharged CTS engine.

The 2014 Cadillac CTS will make its grand debut tomorrow on the internet but at this point, the big debut will be more about the fine details that we cannot see in pictures such as trimlines, engine options, etc. In the meantime, click any of the thumbnails on this page for a closer look at the new leaked images of the 2014 Cadillac CTS!

Based on what you have seen so far, do you think that the 2014 Cadillac CTS styling will help the CTS continue to be one of the bestsellers in the segment? Tell us in the comment section below!