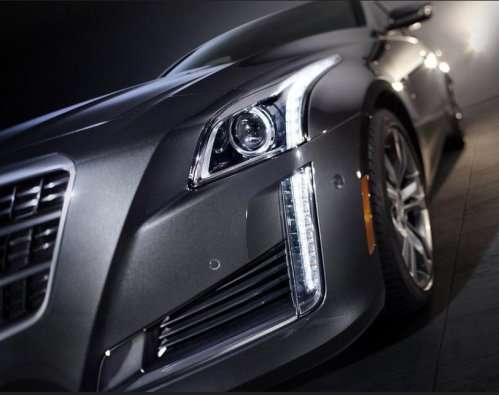 The 2014 Cadillac CTS front, rear and interior revealed ahead of NY debut (Images)

The redesigned 2014 Cadillac CTS will make its grand debut later this week at the 2013 New York Auto Show but thanks to the wonders of the internet – we get an early look at the sexy new midsized luxury sedan in a series of images that appear to be teasers offered up by General Motors although my source believed that these were leaked company images.
Advertisement

First off, these early images of the 2014 Cadillac CTS reveal pretty much exactly what we expected with a vastly more upscale, high tech design both inside and out. In total, five images arrived in my email inbox this morning with three of them showing portions of the front end while the fourth shows the rear end and the fifth shows the new CTS interior. These images help to piece together the puzzle that is the all new 2014 CTS, joining the exciting information that we brought you last week that the CTS would feature a new 3.6L twin turbocharged engine thumping out a whopping 420 horsepower and 430lb-ft of torque.

Not surprisingly, the 2014 Cadillac CTS wears a set of LED trimmed headlights and foglights that nearly join where they would meet with just a thin portion of the front fascia separating the two lighting assemblies. Surrounding these sharp looking front lights (which are remarkably similar to those found on the new XTS and ATS), are lots of hard lines in the fenders, hood front fascia that create a very fluid form while also providing a vastly more aggressive look than the current CTS. In addition to the LED trim, the headlights have an elongated form that presents a very upscale design – again similar to that seen on the popular new ATS compact Caddy. Overall, the front end has a big, bold design that will most certainly resonate well with the luxury sedan buyer with the lines from the front fascia flowing up into the hood to give the new CTS an angry, menacing countenance. In the modern era of luxury sedans, looking angry has become commonplace and it looks like the Cadillac designers have hit a homerun with the new CTS front end.

We don’t get a very good look at the sides of the 2014 Cadillac CTS but several of the front end shots include a look at the sides with the most significant feature being a set of large, split spoke wheels that add a touch of sporty styling to the new midsized luxury sedan. We get far less visual information on the rear end of the 2014 CTS but from what we can see, the CTS will continue to follow the design of the XTS and ATS with tall, LED filled taillights, an LED light bar running across the top of the trunk lid (under the subtle spoiler) and more sharp lines to bolster the aggressive design.

Finally, the sole interior teaser of the 2014 Cadillac CTS shows a close up shot of the passenger side front door panel and from what we can see – this is an interior layout fit for a true luxury sedan. The low gloss wood paneling in the door panel with exposed grain, a variety of different leather colors with contrasting stitching and suede (or maybe Alcantara) trim looks like something that you would expect out of a premium luxury car – which makes perfect sense considering how much General Motors has worked over the past few years to place the Cadillac vehicles alongside the best luxury models in the world. Even though we only have one closely cropped shot of the interior from the 2014 CTS- it looks amazing.

Between the aggressive, high tech exterior design, the super premium interior finishes and the 420 horsepower twin turbocharged V6 – the 2014 Cadillac CTS is a midsized sedan that should have the folks at Jaguar, Mercedes Benz and BMW shaking in their expensive Italian loafers.

The biggest question surrounding these initial 2014 Cadillac CTS images are whether they are leaked or if they are teasers issued by General Motors. Considering the high quality nature of these images combined with the odd cropping and blurriness of some portions, I believe very much that these are teasers issued by GM. My source who sent them to me (which I greatly appreciate) believed that they were leaked, having been sent to him by someone who claimed just that. However, in hunting around the internet a bit before publishing this piece, it seems that these pictures were posted sometime this morning on a Flickr account believed to have been associated with GM. I was unable to locate that Flickr account but with the high quality and odd angles, there is little question in my mind that these are teasers issued by Cadillac and General Motors. Why they didn’t appear on more Cadillac or GM outlets (Facebook, Twitter, etc) is beyond me but the auto world works in mysterious ways and the same can be said for the internet. In the end, all that matters is that we get a very good look at the 2014 Cadillac CTS a few days before it makes its Big Apple debut.

The 2014 Cadillac CTS sedan will make its grand debut later this week at the 2013 New York International Auto Show but the CTS will be unveiled virtually on Tuesday March 26th at 7:15pm via the Cadillac Facebook page. In the meantime, click any of the thumbnails on this page for a closer look at the first teasers of the sexy new CTS!

A very special thanks to Max for this awesome email on a Sunday morning!