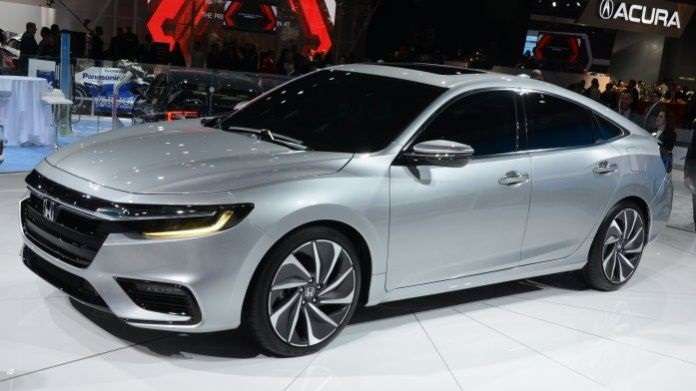 The New Honda Insight Prototype is a Gorgeous Hybrid

Honda didn’t announce any real details on the 2019 Insight Prototype that debuted earlier this month in Detroit, but we don’t need hard numbers to know that this is the best-looking version of the hybrid Honda thus far – while also being one of the best-looking hybrids in the US market.
Advertisement

I should start this piece by pointing out that I am not a “hybrid person”. My daily driver during the winter is a V8-powered half-ton truck and during the other three seasons, my daily driver is a supercharged American muscle car with more than 700 horsepower. I work from home, I don’t put many miles on my vehicles and frankly, I don’t worry about what I spend on gasoline.

Based on my current driving patterns, I would never consider a super-efficient hybrid like the Toyota Prius, Ford CMax, Hyundai Ionic or Honda Insight simply because I don’t drive enough to reap the fuel economy benefits of these models. However, if my driving habits changed and I found myself working to lower my annual fuel costs, I would certainly consider these popular hybrids.

In reviewing new cars, I have had the pleasure of driving many new hybrids and I will say that their driving dynamics have improved a great deal over the past decade. The addition of electric propulsion generally improves the low-end acceleration and with the advancements in hybrid tech, these cars are both quicker and faster than ever. Add in copious amounts of interior technology and today’s hybrids are great daily drivers, but I just couldn’t imagine myself driving a wedge-shaped compact.

I understand the aerodynamic advantages and the extra interior space that comes with the long roof, five-door design of the Prius, Ionic and the previous Insight, but I would vastly prefer a more traditional station wagon design (more like the Ford CMax) or a sedan – and I know for a fact that I am not the only person who is turned off by the “hybrid shape”. While hybrid buyers are clearly prioritizing fuel economy over all else, some of us want a styling car that isn’t shaped like half of a hard-boiled egg and that is why the 2019 Honda Insight Prototype is so appealing.

The 2019 Insight Prototype
As you can see in the image above, the 2019 Honda Insight Prototype is still technically a hatchback, but it has the silhouette of a sedan. The rear end is still a bit higher than the nose, bolstering aerodynamics and rear headroom, but rather than a wedge-shaped five-door, this hybrid feels more like a sleek sedan.

In many ways, the 2019 Honda Insight Prototype looks a great deal like the new Accord, and that is a good thing. The face of the Insight shares some Accord styling, but the hybrid’s front end has a reclined shape that differentiates it from the popular midsized sedan. Like the majority of the Honda lineup, the Insight Prototype has plenty of LED lighting front and rear, with some blade-style wheels and a splash of chrome providing an upscale feel that is also fairly rare in the compact hybrid world.

Of course, we should point out that the 2019 Honda Insight pictured here is a prototype and the production version may vary a bit, but all of our information suggests that the 2019 Insight headed to dealers will look a great deal like the sedan shown above.

2019 Insight Hybrid Drive
The details that we do have on the 2019 Honda Insight Prototype is that it will be powered by a 1.5L Atkinson cycle engine mated to an electric assist motor that is powered by a lithium-ion battery pack. We don’t have power numbers, but Honda is promising a rating of at least 50 miles per gallon from the production model, allowing it to compete with the wedge-shaped hybrids from Toyota and Hyundai.

The Insight is unlikely to really rival the Prius in sales, but this Honda hybrid should prove to be the company’s most popular in the US market thanks to the upscale sedan design coupled with the ability to get better than 50mpg.

What do you think of the exterior design of the 2019 Honda Insight Prototype? Tell us in the comment section below!