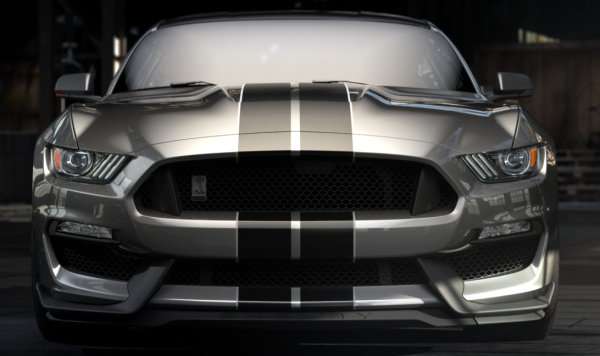 The new Ford Shelby GT350 Mustang will very likely be the most track capable Mustang of all time and if the pricing rumors floating around the internet prove to be true, the newest Shelby GT350 will also be an impressive performance bargain – with pricing beginning around $52,995.
Advertisement

First off, it should be stressed that Ford Motor Company has not yet offered official pricing information on the new Shelby GT350 Mustang. Really, Ford has left a great many questions about the new Shelby Mustang unanswered, but that doesn’t make the car any less enticing. These new pricing rumors only add to the massive levels of enthusiasm for the new GT350 as, if they prove to be true, the Shelby Mustang will be a very reasonably priced car when you consider the level of performance offered.

Insider Information Suggests $52,995
According to the folks at Horsepower Kings, the new Ford Shelby GT350 Mustang will carry a starting price of $52,995. That number comes from an unnamed Ford source with whom Horsepower Kings spoke at the recent Los Angeles Auto Show. This same unnamed sourced indicated that there will be a Tech Package that adds $2,995 to the final price, along with a Performance Package that doesn’t have a price connected to it yet.

When you look at the pricing of both recent and past Ford Mustang high performance models, this price of $52,995 seems perfectly reasonable. Also, the availability of both Tech and Performance packages with other recent Mustangs leads me to believe that all of this information is likely to be proven true in the near future. At $52,995, the new GT350 would be more expensive than the previous generation Mustang Boss 302 while still being thousands less expensive than the 662hp 2014 Mustang GT500.

Undercutting the High Performance Camaros
When you look at the pricing ranges of the previous Boss 302 and GT500 which started at $43,000 and $55,110 respectively, $52,995 seems like a perfectly acceptable price for the new Shelby GT350 Mustang, but that really doesn’t matter. What does matter is that a starting price around $53k would make the GT350 Mustang a few thousand less expensive than the 2015 Camaro ZL1 while also being roughly $20,000 less than the Camaro Z/28. The Camaro ZL1 packs 580hp and 556lb-ft of torque so with the GT350 expected to have at least 500hp and 400lb-ft of torque, the ZL1 will likely have a big enough power advantage to justify that extra cost. However, the GT350 was designed to be a track terror like the Camaro Z/28 and while the Z/28 is far more extreme, the new Shelby Mustang could be a bargain Z/28 fighter.

The Camaro Z/28 is the most track capable road racing, street legal muscle car of all time so the GT350 will have to prove that it is competition for the Z/28. Fortunately, in the event that the GT350 cannot beat the Camaro, there are more rumors of a hotter GT350R coming early next years.

Another Mention of the GT350R
In addition to discussing the expected pricing of the new Ford Shelby GT350 Mustang that has just debuted in the City of Angels, Horsepower Kings also mentioned the expected introduction of the hotter GT350R that we discussed last week. Like the pricing, the mention of the GT350R debut in Detroit was not an official statement by any stretch, but it is yet another piece of insider information that confirms the coming of the newest monster Mustang. With more and more insider reports of the GT350R Detroit debut, it seemingly becomes more and more likely – unless all of these reports are wrong.

Should the Ford Shelby GT350 Mustang start around $53,000, the Motor Company has plenty of pricing room for the GT350R that should better compete with the $72k+ Z/28. Ford could add $15,000 worth of aero bits, suspension components and a carbon ceramic braking system and still price the GT350R thousands below the Camaro Z/28.