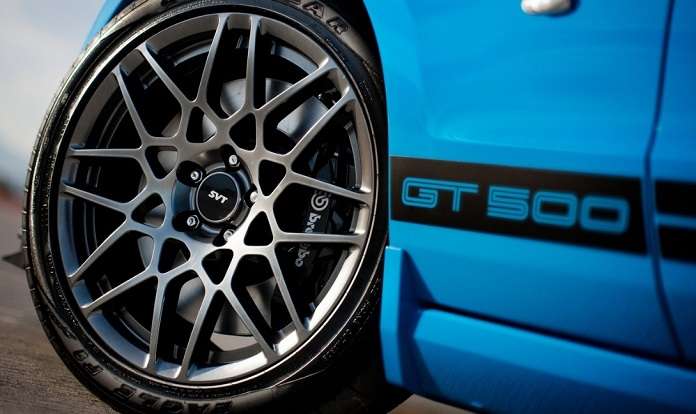 A picture which allegedly shows the top of the engine intended for the upcoming Ford Mustang Shelby GT500 has turned up online along with a company document stating that the newest super-pony will be supercharged.
Advertisement

Since the S550 Ford Mustang was introduced a few years back, there has been a persistent rumor that there is a new GT500 on the way. Early on, when images were captured of the newest Shelby Mustang with different wheels and aero bits, it was believed that the more extreme of the two would be the new GT500. We later learned that the car with the huge wing was the new GT350R, while the milder aerodynamic package belongs to the “standard” Shelby GT350.

Since the GT350 has arrived, the GT500 rumors have continued, with little bits of information along the way to reinforce those rumors. First, there was a listing through Google showing a new GT500 Mustang on Ford.com, although the link did not work. Next, there were scores of spy shots and videos showing a Ford test vehicle which appeared to be a more extreme version of the new Shelby Mustang, with some aspects of the GT350R and a whole lot of camo covering the body.

All along, there has been no official word from the Motor Company about plans for a new Shelby GT500, but thanks to the folks at Mustang6g.com, we have some of the most interesting unofficial proof that there is a supercharged Shelby Mustang on the way.

The 5.2L Supercharged Engine Picture
A member of Mustang6g.com named Super Werty posted an image which is allegedly the top of the engine of the new Ford Mustang Shelby GT500. There have been rumors that the new GT500 would feature a supercharged 5.2L V8, so with the familiar Shelby Cobra logo and “5.2L” stamped on what looks to be a supercharger – it would make sense that this really is the engine of the newest GT500.

We don’t want to steal Mustang6g’s thunder by reporting their picture, but you can check it out by clicking here.

The rumors about the GT500 having a supercharged engine suggest that while it was share a displacement with the GT350, the GT500 will not have a flat plane design. Instead, it is rumored that the blown Mustang engine will have a traditional cross plane design and more than 700 horsepower.

The Oil Change Document
Finally, in addition to the image of the 5.2L Shelby engine, the member of Mustang6g posted a picture of an internal Ford document titled “2020 MY North America Vehicle Programs – Engine Oil Requirements”. At the bottom of that sheet is listed “5.2L Supercharged Mustang GT500”, with the engine oil requirement of 5W-50. It seems unlike that someone would bother to fake something like an engine oil document, so these two images come as solid proof that there is a supercharged GT500 Mustang on the way for the 2020 model year.