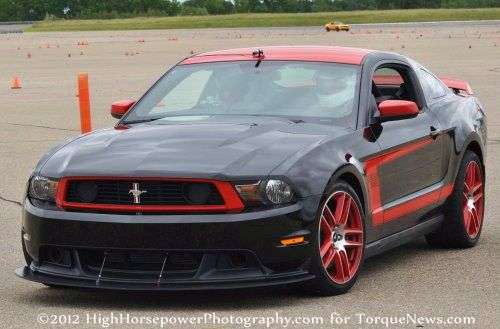 February 2012 was a very good month for the Ford Mustang with sales almost doubling compared to the same month one year ago – allowing the Ford pony car to outsell the Chevrolet Camaro and the Dodge Challenger while claiming the title of top rear wheel drive performance car in the second month of the year.
Advertisement

The Chevrolet Camaro started out the 2012 calendar year much in the same fashion that they ended 2011 – by leading the Ford Mustang and the Dodge Challenger but the mighty Mustang fought back in February 2012 with over 400 more units sold than Chevrolet sold Camaros.

Ford Motor Company sold 7,351 Mustangs in February 2012, not only allowing their pony car to lead the segment in sales but this number also accounts for a whopping 98.8% increase compared to the same month in 2011. There were only 3,697 Ford Mustangs sold last February and with a very good month last month, the Mustang had an incredible February; perhaps helped by the unseasonably warm weather for many areas that are typically buried in snow during the second month of the year. Ford can expect a spike in sales in the near future when the refreshed 2013 Ford Mustang models reach showrooms with a new front fascia, new taillights and more power for the GT (420 horsepower) and GT500 (650 horsepower) models. This past month has helped the Ford Mustang post a growth of 62% through the first two months of the year and if Ford can keep up this momentum through the release of the 2013 Mustang, Ford could have a good chance of winning more monthly sales battles with the Camaro in an effort to claim the title for 2012.

The Chevrolet Camaro ranked second in terms of sales in February 2012 with 6,923 units sold accounting for an improvement of 10.9% over the same month last year. Normally, an increase of 11% in the muscle car segment would make a big difference and while any positive change is a good one – the Camaro’s growth through February is grossly overshadowed by Ford’s impressive 99% increase. The good news for GM is that they still lead for the year, with 12,632 Camaro Coupes and Convertibles sold while the Mustang has moved just 11,087 examples of their muscle car thus far this year.

The next few months could be interesting for all of the American muscle cars, as rising fuel prices could lead consumers to shy away from these high performance models – even though today’s muscle cars are as efficient as ever.

Tesla Giga Berlin's New Hurdle: It's Not Only the Gov't, but Now Tesla Itself
Teslas Are Sold Out Until 2023, But The Timing May Reverse
END_OF_DOCUMENT_TOKEN_TO_BE_REPLACED