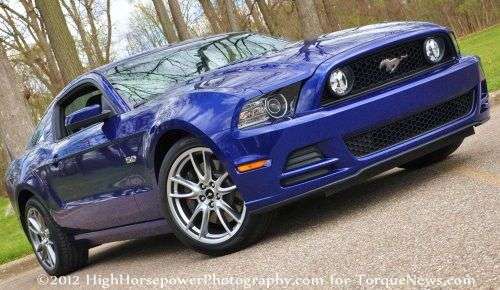 Mustang posts best numbers of 2012, pounds Camaro, Challenger in May

The Ford Mustang had an incredible month in May 2012, selling more vehicles than any car in the rear wheel drive performance car segment has this year in a single month along with comfortably beating the Chevrolet Camaro and Dodge Challenger in monthly sales.
Advertisement

Spring is upon us and the sales numbers show how the warm weather is leading to increased interest in rear wheel drive performance models like the Ford Mustang, the Chevrolet Camaro and the Dodge Challenger. The three combined for a total of 24,266 units sold in May 2012, marking the best month of the year for the muscle cars as the bested the previous best month’s total of 22,642 in March.

The Ford Mustang was the top dog in May 2012, moving an impressive 10,427 coupes and convertibles en route to posting a 57.8% improvement over the 6,607 units sold in May 2011. This is the first time in 2012 that a muscle car has sold over 10,000 units and with 10,427 sold; Ford saw a massive increase over the 7,800 Mustangs sold last month. On the year, Ford has sold 38,361 Mustang coupes and convertibles which accounts for an improvement of 27% compared to the first five months of 2011. Also, thanks to this great month for the Mustang, the original pony car is now only 2,213 units behind the Chevrolet Camaro in the battle for the annual sales title in the segment. This spike in sales is likely due to the fact that the face lifted 2013 Mustang (shown in the gallery on the right) has hit dealerships around the country, featuring the great-looking redesign and the added power to the Mustang GT from the 5.0L V8 with little increase in price. Through the first five months of 2012, the Ford Mustang has moved 38,361 units – an improvement of 27% over the same period last year.

The Chevrolet Camaro was second in the segment in terms of sales with 9,023 units sold but unfortunately for General Motors, this number represents a decline of 4.5% compared to the same month in 2011 while also being a drop of over 600 units compared to April 2012. The Camaro has been consistent over the past three months, selling over 9,000 vehicles in each of those months but the folks at GM surely aren’t too happy with the fact that the Camaro has shown a year-over-year decline in each of the past two months while the Mustang and Challenger have both shown growth. On the year, the Camaro is still the leader in segment sales with 40,574 units sold, which accounts for a 0.7% increase over the first five months of 2011.

The Dodge Challenger posted its best month of the year as well but with 4,816 units sold, the Challenger was well-behind the other two American muscle cars. This figure presented an improvement of 41% compared to May 2011 when Dodge sold just 3,418 Mopar muscle cars. On the year, Chrysler has sold 19,442 Dodge Challenger coupes, accounting for a 16% increase over the first five months of 2011.

It will be interested to see if the Ford Mustang can keep up the momentum and maintain this level of sales next month as consistency has been the key to the Chevrolet Camaro’s success over the past few years. If Ford puts together a sales month in June 2012 like they did in May, the battle between the Mustang and Camaro could be neck-and-neck headed into the peak summer months – just in time for the 2013 Ford Shelby GT500 with 662 horsepower to arrive and take on the high performance Camaro ZL1.