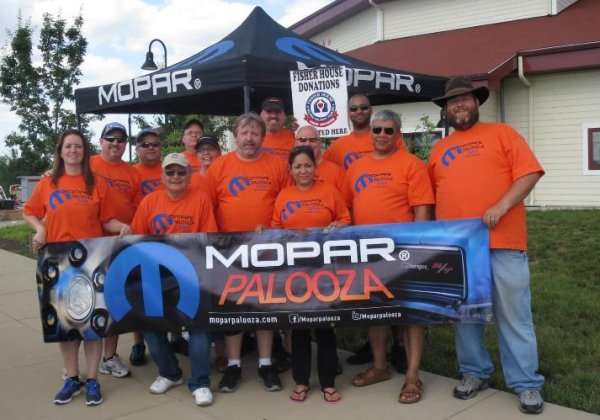 This past weekend brought us the 7th annual Moparpalooza all-Chrysler car show in the DC area and with cooperation with the folks from the Chrysler Group, Moparpalooza 2014 helped to raise a whopping $50,000 for charity.
Advertisement

If you are not familiar with Moparpalooza, it is one of the largest all-Chrysler Group car shows of the year with a huge collection of Dodge, Chrysler, Ram, Jeep, Fiat, SRT and other brand vehicles that have operated under the Chrysler Group roof over the past. This was the seventh year for Moparpalooza and as has been the case in the past few years, the proceeds of the huge Mopar event would go entirely to the Fisher House.

The Fisher House is a charity group which provides housing for military families close to a loved one during hospitalization and treatment for an illness, disease or injury. In other words, say that an American soldier comes home after protecting freedom in the Middle East with an injury that requires some treatment and he or she will have to go to a specific hospital and stay there for an extended period of time, the Fisher House finds a place in the relative geographic proximity for the family to stay. This way, the solider can have his or her family present during the treatment and recovery process without the family having to foot the often costly expenses of staying in a hotel for an extended period of time.

Thanks to the Moparpalooza attendees and the Chrysler Group, the Fisher Hour acquired an awesome $50,000 to help fund their program…all of which came as a result of a large all-Chrysler car show. The $25,000 from the event side of things came from the silent auction which was packed full of amazing Mopar themed goodies, event T-shirt sales, show vehicle registrations and sponsors writing checks while the other $25,000 came entirely from the good people at the Chrysler Group.

I had a chance to speak with Moparpalooza lead man Paul Immo earlier today and he provided me with some of the numbers from the event. The show consisted of 488 Chrysler Group branded vehicles with the cars traveling from 15 states (Michigan, Ohio, Pennsylvania, Rhode Island, Massachusetts, Connecticut, New York, New Jersey, Delaware, Maryland, Virginia, North Carolina, South Carolina, Tennessee, Alabama) and the District of Columbia. Paul wanted to extend a special thanks to his wife Jennifer (who undoubtedly put up with a great deal during the preplanning phase in addition to the show itself), Gina and Travis Knight, Jim Bur, Ralph Gilles and Mark Trostle.

Of course, the show would be nothing without all of the folks who brought their cars out to display and only half of that amazing contribution would have happened without the generosity of the Chrysler Group in matching the donation amount.

Moparpalooza sponsor Waldorf Dodge was on hand with a lovely young woman providing lead coverage and you can get a quick glimpse of the 2014 show – including an interview with Paul Immo – in the video below. Also, those who want to get a look at some of the vehicles in attendance at Moparpalooza 2014 can check out any of the galleries below to see literally hundreds of pictures from the DC show. Honestly, I tried to pick a few to show off in this piece but there are so many pictures of so many awesome cars, I just couldn’t decide so make sure to flip through this pictures to see all of the awesome vehicles of Moparpalooza.

Those Mopar lovers who are interested in either showing off their car at Moparpalooza 2015 – or just coming to DC to check out the show – next year’s event is scheduled for May 30th 2015!