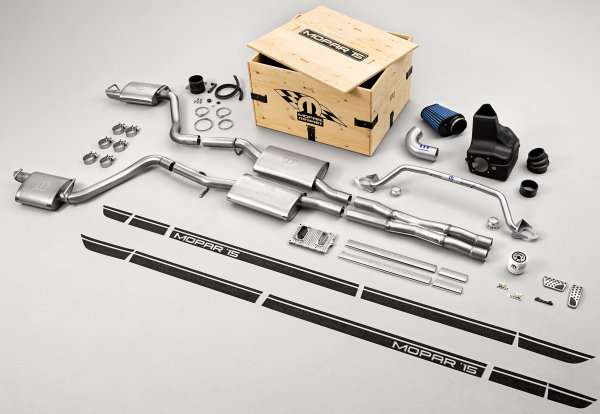 The Chrysler Group’s Mopar performance division has offered up a uniquely badged, limited edition car each of the past five years, but for the new Mopar 15 – owners can create their own Moparized vehicle with all of the components coming in a unique decorative crate.
Advertisement

Starting back in 2010, the Mopar division has had its own unique vehicles, beginning with the Mopar 10 Challenger and followed by the Mopar 11 Charger, the Mopar 12 300, the Mopar 13 Dart and the Mopar 14 Challenger. Each of these vehicles had a unique look inside and out along with some minor performance upgrades, making these limited edition Mopar vehicles popular collector’s items for diehard enthusiasts.

Mopar has designed a package for the Dodge Charger R/T for 2015, but instead of buying pre-built vehicles, the Mopar 15 package can be purchased by any Charger owner for installation at home or at a trusted shop. However, with just 50 examples of the Mopar 15 kit being available for sale, Chargers with this package will join the collectable ranks of the other Moparized cars.

“Mopar has a long history of delivering to enthusiasts performance and customization in unique and convenient packages,” said Pietro Gorlier, President and CEO — Mopar Brand Service, Parts and Customer Care, FCA. “We are now shifting into another gear and offering a limited-edition kit that will allow customers to really enhance the performance and look of their Dodge Charger R/T.”

The Mopar 15
The Mopar 15 kit for the 2015 Dodge Charger R/T begins by adding the Scat Pack Stage 1 components, which includes a Mopar Performance cat back exhaust system, a cold air intake, a high flow oil filter and a performance tuned engine calibration that adds 18 horsepower and 18lb-ft of torque. To improve the handling and the underhood appearance, the Mopar 15 kit also includes a strut tower brace.

To upgrade the exterior appearance, the Mopar 15 kit adds Scat Pack Stage 1 badges and matte black Mopar 15 body side graphics while the interior is dressed up with a bright pedal set, door sill guards and a Mopar 15 serialized dash plaque.

Finally, the Mopar 15 kit comes with an owner’s package that includes a certificate of authenticity for the limited edition package, a brochure about the package, a vintage Scat Pack poster, a Mopar Performance fender badge, a Mopar magnetic tray and other components that are not specified.

Build the Mopar 15 Yourself
All of the components for the Mopar 15 package come in a decorative crate and the price for this whole package is $3,550. Of course, that doesn’t include the cost of installing the components, but the items are simple enough that most owners who do their own work will be able to install everything in their garage or driveway.

The Mopar 15 kit can be ordered at your local Dodge dealership right now and the company plans to begin delivering the uniquely-packaged modification kits later this month. The key advantage to this format for the Mopar 15 is that the owners can decide what color they want their 1 of 50 Charger R/T to be. The past Mopar vehicles were almost all black with the Mopar 14 Challenger coming in white, but with the Mopar 15 kit, owners can apply the kit to Chargers or all colors.