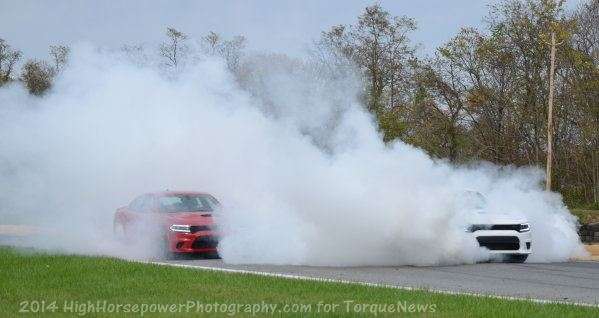 The 2015 Dodge Charger SRT Hellcat packs 707 horsepower from a supercharged 6.2L Hemi and while that makes this brawny Mopar sedan the quickest and most powerful 4-door car in the world, it also makes for one wicked burnout machine – which the SRT team was kind enough to show us at the recent Charger media launch.
Advertisement

The SRT team has done a fantastic of designing the drivetrain and chassis of the 2015 Dodge Charger SRT Hellcat to make the most of the 707 horsepower and 650lb-ft of torque, which is how this full sized sedan in stock form can blast through the quarter mile in 11 seconds flat while dashing from a stop to 60 miles per hour in the low 3 second range. However, when you have that much power at your disposal, it also allows you to do some monster burnouts and to show off just how well the Hellcat Charger will turn the tires to smoke and black stripes on the ground, the company lined up three new 707hp sedans on the front straightaway at Summit Point Raceway to do conduct a legendary tire smoking session.

Conducting a 2121hp Burnout
Before getting into the video of three new Dodge Charger SRT Hellcat edition sedans destroying their rear tires, a quick look at how a video like this comes to exist. While doing a massive, smokey burnout with a car doesn’t really exhibit any of the real world performance capabilities – almost all performance car fans love burnouts. I have never been without at least two vehicles of my own that will easily destroy the rear tires, yet it has never gotten old and I know that a great many of my readers enjoy seeing burnouts just as much as I do. Chrysler knows this and they have been kind enough to stage a huge burnout at each of the Hellcat vehicle launches. At the Challenger launch in Portland, they had one Hellcat Challenger doing a burnout that started in the burnout box and then extended down Portland’s ¼ drag strip.

At the 2015 Dodge Charger media launch at Summit Point Raceway in West Virginia, the team told us early on that they would do one, big burnout at the end of the event. As the day of racing the entire 2015 Charger lineup around the track drew to a close, the preparation was well underway. Since Summit Point doesn’t have a drag strip (or a burnout box), the SRT team had to decide where exactly do to the burnout and after considering the wind and such, they decided to do the burnout on the front straightaway, as if they were coming out of turn 10. This allowed all of us to stand along the pit wall and witness this colossal burnout.

Best of all, the SRT, Dodge and Chrysler Group shot callers decided that rather than just doing a burnout with one Hellcat Charger, they would have three of them doing burnouts at the same time. Of course, with this American sport sedan being the most powerful 4-door production car in the world, it would only make sense to pick a red car, a white car and a blue car to orchestrate this display in burning rubber.

The Risks of a Three Charger Burnout
The key concern for the three drivers tasked with performing this stunning burnout display with the 201 Dodge Charger SRT Hellcat was that if the cars got pointed in some direction other than straight ahead, there would be a chance of catastrophe. Even with the white car staggered a bit ahead of the red car and the blue car, the drivers would have to make certain to keep the cars pointed straight ahead even though they would be completely surrounded in thick tire smoke.

Fortunately, after these three 707hp Dodge sedans roasted the tires for about 25 straight seconds, the white Hellcat Charger came blasting out of the smoke with the rear tires still ablaze, followed by the red car shortly after. The blue car also comes roaring out of the smoke, but there is so much smoke that you cannot see the final car. However, with the speakers turned up, you can most certainly hear the third and final 707hp Charger blast past my GoPro.

Drive impressions from the event are under lock and key until later this month so stay tuned for that, but in the meantime, enjoy this absolutely epic burnout video courtesy of the mighty Hellcat Charger.