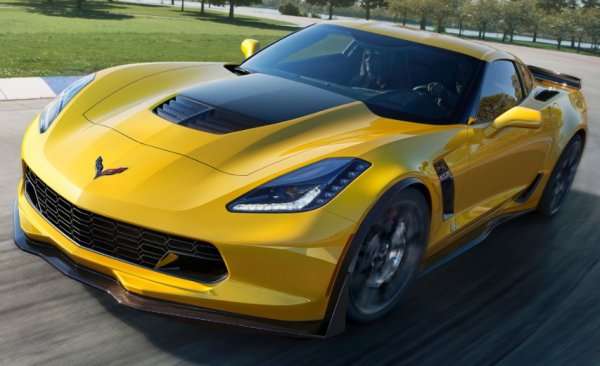 General Motors fired a shot heard round the automotive world this morning with the announcement that the 2015 Corvette Z06 pricing starts at just $78,995 – easily making it dollar for dollar the best supercar bargain in the world.
Advertisement

When General Motors introduced the 2015 Chevrolet Corvette Z06 back in January at the 2014 North American International Auto Show in Detroit, they stated that it would be the most track capable Corvette of all time. Considering the storied on-track history of the Corvette over the past 60 years, being the most track capable is a serious claim, especially considering how incredible the C6 ZR1 was as it set track records around the world. However, with the 2015 Z06 packing a more powerful, supercharged engine than the C6 ZR1, a new, more aerodynamic body and comparable high performance braking and suspension systems – the new Z06 seems up to the task of knocking off the previous ZR1.

“The 2015 Corvette Z06’s performance and technical capabilities place it in the elite fraternity of supercars,” said Harlan Charles, Corvette product and marketing manager. “Very few cars in the world deliver 650 horsepower, true aerodynamic downforce, carbon fiber and performance technologies such as Magnetic Ride Control, Performance Traction Management and an electronic limited slip differential – and none gives the driver a transmission choice or the choice of a coupe with a removable roof panel or a full-power-top convertible.”

The 2015 Corvette Z06 Starts at $79k, Easily Climbs to $90k
No aspect of the 2015 Chevrolet Corvette Z06 pricing has been as surprising as the starting price under $80,000. This is so stunning that I would say that it nearly rivals the fact that the Dodge Challenger SRT Hellcat has 707 horsepower. The 650 horsepower, 650lb-ft of torque Corvette Z06 coupe starts at just $78,995 including destination, but not including tax and title. This is a car that is promised to beat up the C6 ZR1 on any race track in the world and it costs almost $50,000 less…!

The 2015 Corvette Z06 appears to be the best performance car in the world, dollar for dollar, with the ability to easily blow away far more expensive European supercars.

So the starting price for the 2015 Corvette Z06 coupe is $78,995 and for those who want the open air freedom of a 650hp Z06 convertible, the price rises to $83,995. If you want improved aerodynamics, you can add the Carbon Fiber Ground Effects Package for $2,995 that includes a front splitter, carbon fiber side sills and a large rear spoiler.

If you want an even more track capable 2015 Corvette Z06, you can pay an extra $7,995 for the Z07 Performance Package. This adds massive Brembo carbon ceramic-matrix brake rotors that weigh less than the standard brakes and reduces stopping distances by a significant margin. The Z07 package also adds an adjustable element to the Carbon Fiber Ground Effects Package and premium high performance Michelin Pilot Super Sport Cup tires.

“The Z07 performance package enhances overall performance to make the Corvette Z06 one of the most track-capable cars you can buy off the dealership floor and still drive it to work every day,” said Charles.

In other words, before adding any of the stand alone options like the Performance Data Recorder, the Competition seats or the carbon fiber interior kit, the 2015 Chevrolet Corvette Z06 coupe in its highest level of performance will run you about $89,985 and the convertible costs around $94,985 – before applicable taxes and dealership fees.

The Corvette Z06 is going to kill almost every other sports car in the world and it will do so for a fraction of the competition’s price.