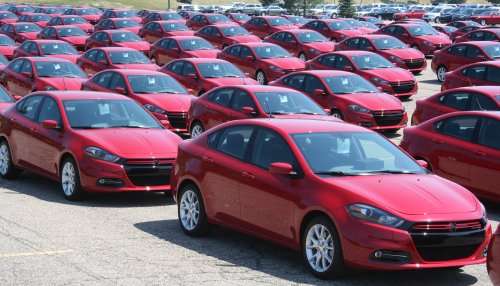 Yesterday afternoon at the Palace of Auburn Hills, just a few miles from the Chrysler Group headquarters, around 250 Dodge dealerships from around the Michigan and Ohio areas received their first demonstration versions of the 2013 Dodge Dart.
Advertisement

As was the case with other major markets around the United States, Michigan and Ohio Dodge dealers took part of a drive away event where some 250 2013 Dodge Dart sedans pulled out en route to their debut in dealerships around the northern Midwest. The 2013 Dodge Dart units that were received at the Palace of Auburn Hills yesterday afternoon were all Redline Rallye models fitted with the 1.4L MultiAir turbocharged engine.

Mike Gruenberg, Sales Manager of Martin Chrysler Dodge Jeep, Alma, Michigan was among the dealership representatives who were in Auburn Hills yesterday to happily receive his company’s first 2013 Dodge Dart. “The quality of Chrysler products now is phenomenal, looking at the 2010 to 2011 and 2012 models,” said Gruenberg. “We have the best products in the market.”

Gruenberg, who is been in the auto industry for some 22 years, having worked with both Ford Motor Company and General Motors before joining the Chrysler Group, went on to elaborate on the importance of the 2013 Dodge Dart to the Chrysler lineup. “We need something desperately to compete with the [Chevy] Cruze and the [Ford] Focus. It’s going to be great. I have five or six people waiting for me to get back. This one will probably be sold before the day is out.” Gruenberg is shown in the gallery on the right, putting the license plate on his company’s first Dart.

Unlike the initial 2013 Dodge Dart sedans that debuted at the first major drive away event in Texas, which features massive decals on the hood and along the sides of the vehicle – the new Darts that rolled out of the Palace yesterday were normal looking production models. The Texas Dart sedans sported unique black stripes on the hood with the Dart logo while the sides of the car featured the hashmarks of the Dodge logo and the “New Dodge Dart” logo on the doors. All of these models are intended to serve as dealership demonstration models and while these eye-catching decals might make it a bit harder to sell these first Darts in Texas; Michigan and Ohio dealerships may have a much easier time parting with their first Dart.

While it might seem like a nice, easy sale for a dealership to sell their first issued 2013 Dodge Dart, there has been speculation that the first full scale wave of Darts to hit dealerships for sale may not arrive until late in July or even early August. Should that time frame be true, dealerships who sell off their first 2013 Dart demo model may see prospective customers go elsewhere to experience the cutting edge new compact sedan. The Dart is expected to be a pretty big deal when it does hit dealerships so having a car on the lot for customers to drive and check out before the full flood of production models arrive could be crucial in moving units down the road.

Tsingshan's Threat to Tesla: EV Maker Is In Battery Crosshairs
Tesla-Funded Research Reveals One of The Biggest Mysteries of EV Battery
END_OF_DOCUMENT_TOKEN_TO_BE_REPLACED