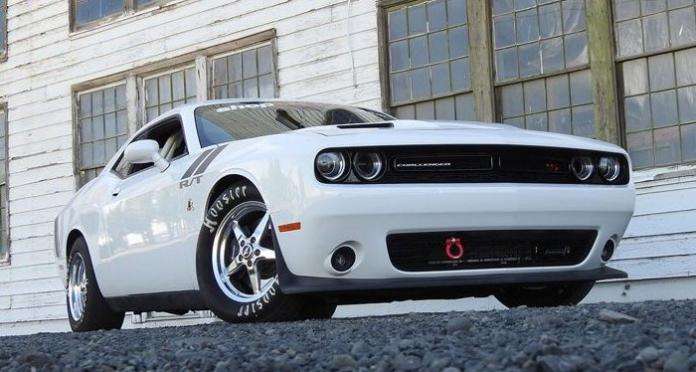 Today we bring you a look at what we believe to be the quickest Dodge Challenger R/T Scat Pack in the world, running in the mid 10-second range and aiming for the 9s once owner Jesse Rose is able to get a little better traction.
Advertisement

We talk about a great many record-setting cars here on TorqueNews, with the most commonly discussed models being the Dodge Hellcat Challenger and Charger, the Camaro SS and the Camaro ZL1. Today, we introduce you to the quickest Dodge Challenger R/T Scat Pack in the world, which with some traction, could be running comparable times to some of the quickest Camaros we have featured recently.

The World’s Quickest Scat Pack
The modern Dodge Challenger R/T Scat Pack is a budget muscle car, packing 485 horsepower and the ability to lay down quarter miles times in the mid-12s for under $40,000. There is no other car sold in America that will get you that close to 500hp for under $40k, so for someone looking to pack the most muscle for the smallest price tag – the Challenger Scat Pack is a great choice.

However, as is the case with the many modified Hellcat cars and new Camaros that we feature, stock power just isn’t good enough for some people. Jesse Rose is one of those people, as he has converted his budget muscle car into a Camaro ZL1 hunter and in doing so, his Scat Pack Challenger is the fastest modern Scat Pack car in the world in the quarter mile and the quickest manual transmission Scat Pack car in the world.

Just how quick is Jesse’s 392 Hemi-powered Dodge? Well, with traction issues (which he plans to rectify in the near future), this bottled, blown and built Challenger Scat Pack has laid down a best quarter mile ET of 10.409 and a best quarter mile trap speed of 142 miles per hour. Anyone who knows drag racing likely recognizes that a trap speed of 142 miles per hour is enough to put most cars into the 9s, so with better traction, this Challenger will most certainly go even quicker in the quarter mile.

To get his 2016 Dodge Challenger R/T Scat Pack to make the power needed to run mid-10s, Rose pulled the engine and rebuilt it from the bottom up, adding a forged rotating assembly, a high performance camshaft and, most importantly, a Magnusson TVS2300 supercharger with a smaller-than-standard pulley on the supercharger and on the crankshaft to run higher levels of boost. The car also has a beefed up fuel system with dedicated fuel cell for the 200-shot nitrous oxide system, a high volume fuel pump and high flow fuel injectors to help feed that hungry, supercharged Hemi. This engine build was performed by Jesse Rose and Billy Irby, while Troy Ding of Ding’s Racing handled the tuning.

Finally, to help put all of that power to the ground, Rose’s Scat Pack Challenger has a McLeod twin disc clutch (that’s right – it’s a manual), a Barton shifter, a Hop Not suspension stabilizer, a differential brace, a Driveshaft Shop driveshaft and axles and 17 inch Racestar wheels out back wrapped in Hoosier slicks with matching skinnies up front. He also has a Tazer line lock setup to help get tires hot and an N2MB 2-step to help launch the car more consistently.

In speaking with Rose about his record setting Challenger, he explained why he is likely to break his own record very soon. First and foremost, he is unable to get good traction on the launch, so even on his 10.409 run, the back end of the car was all over the place. He plans to fix this by swapping to a smaller rear braking setup, which will allow him to run a 15 inch wheel and a wider drag slick out back. Once he is getting better traction, he will be able to use all of the available power, as right now, he is not using the full 200-shot of nitrous. Based on his trap speeds, good traction will almost certainly put him in the 9s, but the extra power on top of that traction will guarantee it.

We have included two videos of Jesse Rose’s built, blown and bottled Challenger Scat Pack. The first video shows Rose making his record 10.409 run and the second shows him pummeling a 5th gen Camaro ZL1. In both videos, it is very clear that the worked Hemi is overpowering the tires, but even with all kinds of traction problems, this Challenger is still the fastest Scat Pack model in the world and the quickest with three pedals.