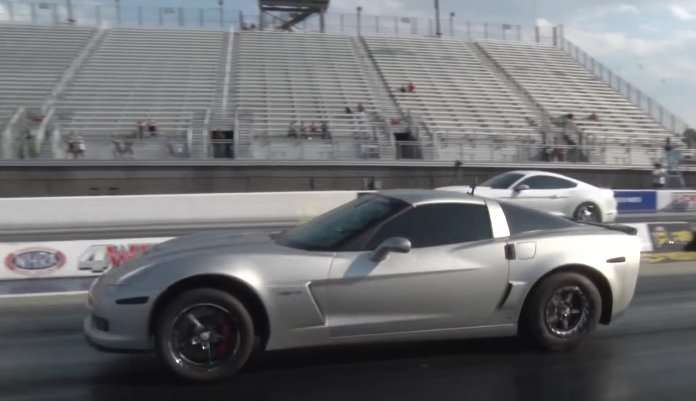 Meet the World's Quickest Chevrolet Corvette with a Manual Transmission

There are lots of videos online featuring crazy quick Chevrolet Corvettes storming down the quarter mile, but the driver of this incredible American sports car claims that his car is the quickest in the world with a manual transmission – and I can’t find any evidence of a quicker 3-pedal Corvette.
Advertisement

In the world of high performance American cars, the Chevrolet Corvette has long been the top dog. While the likes of the Dodge Challenger and the Ford Mustang will occasionally make a run at the Corvette, Chevy’s sleek sports car has been one of the most popular American performance cars since it was introduced back in the 1950s.

The popularity of the Chevrolet Corvette is bolstered by the ease with which they can be modified to make far more horsepower and in terms of modern models, making a thousand horsepower or running in the 8-second quarter mile range is far from rare. On the other hand, it is rare for a heavily built Corvette to be equipped with a manual transmission and it is even more unusual for a monster-power Corvette to maintain the stock 6-speed manual transmission, as swapping to an automatic gearbox makes the car easier to launch, easier to shift and quicker down the track.

However, not everyone turns to an automatic transmission and the Corvette in the video below is a great example of proof that you can go very, very fast with a manual transmission.

The World’s Quickest Manual Transmission Corvette
The 7-minute video below features a C6 Chevrolet Corvette Z06 which has been fitted with a 434 cubic inch LS-based V8. That big engine is topped with a ProCharger F1X supercharger and with what is certainly a long list of supporting modifications, allows this Corvette to make somewhere in the area of 1300-1400hp without the nitrous system (meaning that this car has far more potential). Those are impressive numbers, but making this C6 Corvette even more impressive is the fact that it is still equipped with the Tremec 6-speed manual transmission which was in the car when it rolled off of the assembly line.

Finally, there are no chassis or suspension details, but we can bet that this Corvette has just as much work done under the car as it does under the hood, allowing this silver Chevy supercar to put all of that power to the wheels.

In the video below, the supercharged Corvette makes a handful of quarter mile runs, first running in the low 9s before cracking into the high 8s. As the driver gets the car into the 8.80s, he explains to the cameraman that he is shooting for the manual transmission quarter mile Corvette record of 8.77.

On the next run, which we get to watch from multiple angles, this Chevrolet Corvette slips and slides all over the track, but the driver stays in it – laying down an incredible run of 8.75 at 169 miles per hour. That 8.75 makes this Corvette the quickest in the world with a manual transmission and it ran those numbers with questionable down-track traction.

Once the nitrous system of this Corvette is turned on and the power levels jump, a good launch and good grip along the course of the run will almost surely help this car break its own manual transmission record. Meantime, grab a drink, kick back and enjoy this 7-minute video of the world’s quickest manual transmission Corvette.