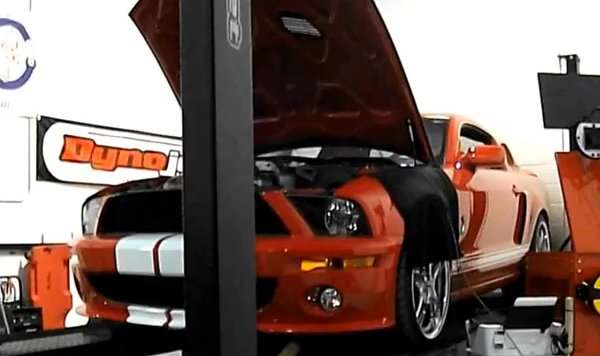 The 2015 Dodge Challenger SRT Hellcat is the most powerful muscle car of all time, but those Mustang Shelby GT500 owners who want to be able to knock off the 707hp Mopar can turn to the folks at Blue Collar Performance, where their “Hellcat tamer” package will add more than enough power to knock off pretty much any production car in America.
Advertisement

The Ford Shelby GT500 Mustang was the most powerful muscle car of all time and one of the most powerful American production cars ever, with 662 horsepower and 630lb-ft of torque, but when the 2015 Dodge Challenger SRT Hellcat was introduced with 707 horsepower and 650lb-ft of torque, the Mustang had to hand over all of its non-Mustang specific titles. The GT500 Mustang is still the fastest production muscle car ever, with the Challenger only being certified for 199 miles per hour where the Shelby can break 200, but the Hellcat is more powerful and much quicker.

The Hellcat Hemi Challenger is going to be a tough opponent for the Ford Mustang Shelby GT500 in stock form, but the folks at Blue Collar Performance have the answer – and they call it the Hellcat Tamer. In this case, the GT500 sporting this monster package is a 2007 model year Mustang, building the older 500 horsepower Shelby up to 765 Challenger-crushing power.

The Hellcat Tamer GT500
The 2007 Ford Mustang Shelby GT500 in the video below is built by Blue Collar Performance in Metro Detroit, Michigan and it has been fitted with a collection of components which – when combined – BCP calls the Hellcat Tamer. The package begins with an upgraded Ford Racing TVS supercharger, a JLT cold air intake, Lunati camshafts, an ATI engine damper, Injector Dynamics injectors and a proper engine tune on an SCT tuner to bring everything together with the best results.

Not surprisingly, this built, blown 2007 Ford Mustang Shelby GT500 sounds incredible while in action so crank up your speakers and enjoy the roar of a car that will have Hellcat Challenger owners running for their Mopar Performance catalog.