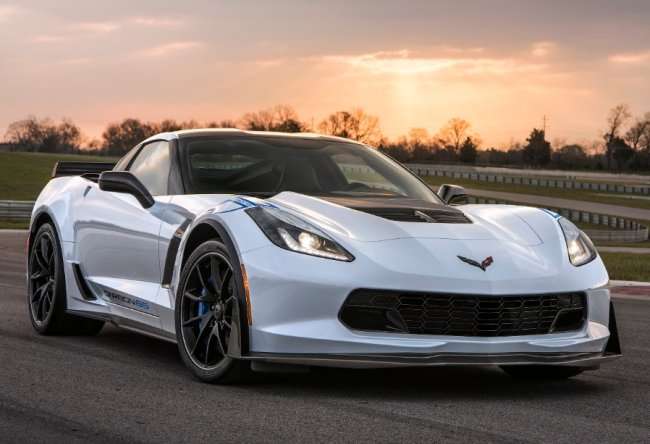 2018 marks the 65th anniversary of the Chevrolet Corvette and to celebrate, GM has rolled out the Carbon 65 Edition package for the C7 Corvette Z06 and Grand Sport – adding a heavy dose of carbon fiber trim to just 650 cars.
Advertisement

The Chevrolet Corvette hit the market back in 1953 and since then, it has developed a reputation for being one of the greatest sports cars in the world. The Corvette has been the leading American sports car while proving to be capable of battling the best from across the pond and when the 2018 models arrive, the crossed flags will be featured on some of the world’s fastest cars for the 65th year.

To celebrate the Corvette’s 65th birthday, Chevrolet has created the Carbon 65 Edition for the 2018 Grand Sport and Z06 models, but only in their top of the line 3LZ/3LT form.

“Corvette is one of the most storied names in Chevrolet and sports car history, with a heritage few can match,” said Paul Edwards, U.S. vice president Chevrolet Marketing. “The new Carbon 65 Edition honors that legacy, while offering customers another unique, special-edition model that personalizes the ownership experience.”

That seems like a relatively short feature list, but keep in mind that this is basically a carbon fiber exterior package on the top of the line Corvettes – bringing about an even more upscale feel to Chevrolet’s premium supercars.

The Corvette Carbon 65 Edition will be limited to just 650 units worldwide, so if you are looking to drop some big money on a 2018 Corvette – you will want to act quickly to get one of these carbon fiber-clad supercars.