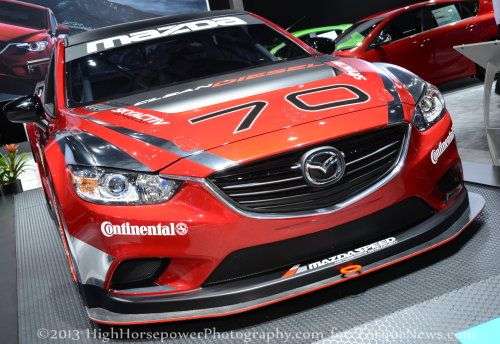 The centerpiece of the Mazda display at the ongoing 2013 Detroit Auto Show is the new Mazda6 Skyactiv-D race car – a diesel powered race car that is destined for the Grand Am racing series but more importantly, this car shows that there is a vehicle to generate some excitement in the Mazda lineup.
Advertisement

The Mazda 6 sedan has been one of the company’s bestselling models for some time but with declining sales and a less than favorable conversion rate between the American dollar and the Japanese Yen, Mazda decided to end production of the Mazda 6 sedan at the Flat Rock plant in Michigan at the end of the prior generation. In addition to moving production back to Japan, Mazda introduced a sleek new Mazda 6 that sports an aggressive new exterior design that should go a long way in helping the 6 stand out in a very crowded midsized sedan segment. Also, the addition of the Skyactiv-D diesel engine option should help give his new Mazda a leg up against the competition with fuel economy figures that should make it one of the best in class.

Now, I am fully aware that the Mazda 6 Skyactiv-D race car that is on display at the 2013 North American International Auto Show is a far cry from the Mazda 6 sedan that is currently on sale at dealerships around the country but we should keep in mind that this great looking race car is closely based on the production version. If you were to add the race wheels, the carbon fiber chin spoiler, the huge rear wing and the flashy race livery to the standard production Mazda 6 sedan, it would look very similar to this race car with the only real difference being the lower ground effects package along the side of the car. This shows just how sporty the 2014 Mazda 6 is in stock form when you consider how little has changed on the outside between the production version and the race model shown above on the right. Where some vehicles have panels that make the race version like a whole different car – the Mazda 6 race car almost exactly follows the styling design of the road model.

The reason that the similarities between the 2014 Mazda 6 sedan and the Mazda6 Skyactiv-D race car shown here matter relates to why the previous generation Mazda 6 wasn’t doing so well in the US market. The Mazda 6 competes in a segment that is chock full of very popular cars and in the “D segment” as it is known within the industry, every little aspect of a vehicle can make or break its chances. The prior generation of the Mazda 6 was a bit on the bland side while the majority of its main competition had introduced more aggressive, youthful styling. The fact that the basic design of the 2014 Mazda 6 lends itself to a race car design so well shows that this new exterior is a big step in the right direction. Finally, Mazda has a midsized sedan that will stand out in the crowd for all of the right reasons.

Also, the introduction of the new 2.2L Skyactiv-D diesel engine for the 2014 Mazda 6 sedan should go a long way in helping Mazda compete with those models in the class that are known for their superior fuel economy such as the Ford Fusion and the Toyota Camry. The race purposed diesel drivetrain doesn’t make for a fair comparison to the production models but Mazda is making a good move in showing that this new oil burner can be modified enough to serve race duty. There aren’t a great many people who buy D segment sedans to modify them but the spread of diesel engines in motorsports should help to make the new diesel technology more acceptable with the go-fast crowd.

In short, the use of the Mazda 6 in the Grand Am racing series with a look that is so similar to the production version should help give this midsized sedan some street cred among younger buyers while the use of the diesel engine shows that this engine can provide lots of power to accompany the great MPGs.

For a closer look at the 2014 Mazda Akyactiv-D race car, click any of the thumbnails above on the right.

Anonymous wrote on January 25, 2013 - 8:09pm Permalink
I'd be more impressed with the brand if Mazda dares to market a CX-5 diesel here in the USA with their i-stop technology.
Martin wrote on January 26, 2013 - 10:09am Permalink
Uumm... Patrick, The 6 race car is actually rear wheel drive... Doesn't mean it isn't any less sexy than you implied though,band I appreciated your enthusiasm throughout the article. Lastly, Mazda left production in the US because they bought their shares back from Ford, and were essentially unchained and allowed to produce products however, and wherever they want. Which was in stark contrast to what and how the Fusion, Milan and MKZ came to be. This should prove to be a very good product now that the 6 doesn't have to be build with Ford in mind any longer. You should also go test drive one, its incredible.