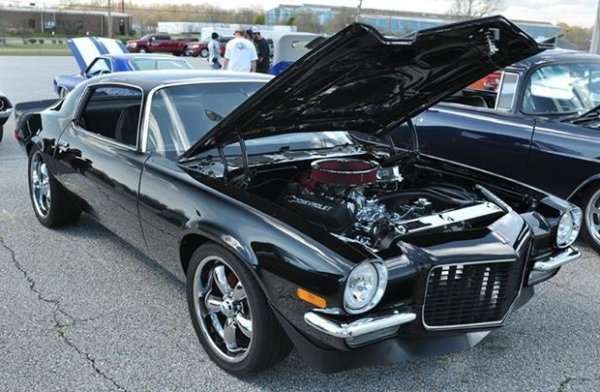 May Camaro of the Month: Shane Rhyne's 1973 Chevrolet Camaro LT-350

The TorqueNews/Camaros Unlimited Camaro of the Month for May 2016 is this black 1973 LT-350 owned by Shane Rhyne.
Advertisement

Each month, TorqueNews teams up with the members from the Camaros Unlimited Facebook page to select our Camaro of the Month. The process begins with the members of the Camaros Unlimited Facebook page – numbering more than 40,000 strong – nominating their favorite Chevrolet Camaro owned by a fellow member of the page. Once five cars/owners have been nominated, the voting begins and when the balloting closes – we have our Camaro of the Month.

For May 2017, the Camaro of the Month is the brilliant black 1973 Camaro shown above, owned by Shane Rhyne. We reached out to Shane for more information on his super-clean Chevy muscle car and this is his story.

Shane Rhyne’s 1973 Camaro
Shane bought his 1973 Chevrolet Camaro LT some 8 years ago, having met the previous owner at Indianapolis Motor Speedway to view the car and making the deal on the spot to make it his own. After noticing that the second generation Camaros didn’t have much presence in the local car show scene, he began hunting for the body style that he had always admired – and this gorgeous black Camaro was the result of his search.

Since buying the car, Shane has completed a total restoration with a heavy dose of customization. Under the hood, you will find a 383 cubic inch stroker topped with Dart aluminum cylinder heads and Fitech EZ EFI. Attached to that monster motor is a vintage air conditioning system and to improve the overall look of the engine bay, the firewall has been smoothed and the various hoses and such have been tucked away.

As he heads into car show season, Shane plans to get his 1973 Camaro to as many local shows as possible, along with a few National Street Rod Association shows and a Goodguys event.

Finally, Shane had this to add for those who have played a part in his Camaro:
“I would like to thank my Brother Shawn Rhyne for all his help on this car as well as Gregg Dunkin for his help and use of his shop during this whole process. I would also like to thank Spanky’s HotRods for their help on Body and Paint work, along with the folks at Coys Wheels! If it wasn't for my family and friends it would of never been possible!”