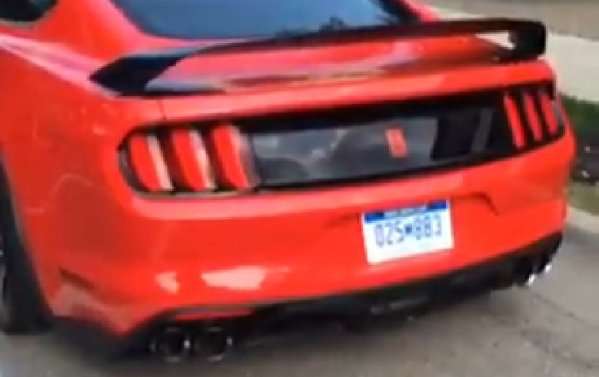 Listen to the Shelby GT350R Mustang Scream at High RPM

We have featured a couple different videos of the new Ford Shelby GT350 Mustang with official clips from the automaker and amateur clips caught in the wild, but none give us a chance to hear the new 5.2L flat plane V8 scream like this newest video from The Smoking Tire’s Matt Farrah.
Advertisement

Unless you live under a rock, you are familiar with the new Ford Shelby GT350 Mustang. Offered in both regular and “R” trim, the new Shelby GT350 is expected to be one of the greatest Mustangs of all time and a big part of that premium level of performance is the new 5.2L flat plant V8 engine. The flat plane design features a handful of advantages over the traditional V8 that powers the Mustang GT, including a unique sound, a massive power curve and the ability to rev very quickly.

The Smoking Tire’s Matt Farrah recently bumped into Ford SVT boss Jamal Hameedi and after following the guy around for a while, the pair arrived at Hameedi’s ride that day – the Shelby GT350R Mustang. Best of all, Farrah was able to talk the high ranking Ford exec into firing up the new Shelby Mustang to give the 5.2L flat plane V8 a couple revs – harder revs than we have seen before on video – and this allows us to hear the beast roar like never before.

Real Revving from the GT350R
The odds are good that if you are as interested in the new Ford Shelby GT350 Mustang as we are, you have seen at least one or two videos where you got to hear the 5.2L V8 in action. However, those videos (from what I have seen) are the professionally mastered videos from Ford Motor Company in which the engine sound is captured from a distance or in amateur videos where we only hear mild revs and low RPM. Those all gave us a chance to hear the unique exhaust note of the GT350, but we really haven’t heard the new flat plane V8 really scream – until now.

When Jamal Hameedi reaches his new Shelby GT350R Mustang with Matt Farrah (and his camera) close in tow, the SVT boss happily fires up the 526 horsepower pony car. We get to hear the engine idle for just a second and then the good part begins, as Hameedi hammers the throttle and pushes the 5.2L V8 up towards its redline. The engine quickly and effortlessly climbs to these high RPMs, moving up and down through the rev range like no other stock Mustang I have ever heard. He gives the car several quick, hard revs and the resulting exhaust tone is nothing short of awe-inspiring.

I could really go on and on about the sound of the Shelby GT350R Mustang, but it is easier for us all if you just crank up your speakers and watch the video below.

Stalked SVT Boss Jamal Hameedi and had him give me a few revs in the GT350R.