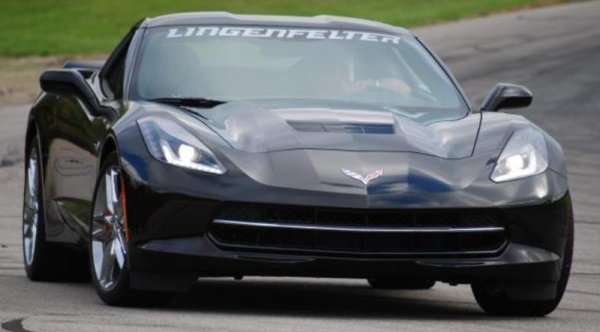 Even though the C7 Chevrolet Corvette Stingray is the most powerful “base” Corvette of all time, there come times when you just need a whole lot more power and thanks to the full lineup of high performance packages, the folks at Lingenfelter Performance Engineering can satisfy the need for speed of almost any driver.
Advertisement

As the American horsepower wars reach power and performance levels like never before, the Chevrolet Corvette Stingray has a tremendous amount of competition – even when only looking at the cross town rivals from Ford and Chrysler. While the Stingray is clearly a true sports car while the Ford Mustang and Dodge Challenger and bigger, heavier muscle cars; vehicles like the Shelby GT500 Mustang and the new Dodge Challenger SRT Hellcat will comfortably hand the “base” Corvette a pretty serious beating in a straight line. To help solve that problem, the folks at Lingenfelter Performance Engineering (LPE) have rolled out their Performance Series packages for the Corvette Stingray that lifts the power from the standard 455 horsepower to figures starting at 550hp and climbing to figures well beyond those of the mighty Hellcat.

Lingenfelter Corvette Power Comes in Two Flavors
For those 2014 or 2015 Chevrolet Corvette Stingray owners who find the standard horsepower of the new LT1 engine to be a little on the mild side, Lingenfelter has two distinct directions to help make much bigger power – naturally aspirated and supercharged. LPE used their experience with the new General Motors truck engines which feature a similar direct injection setup to tune the C7 Vette and a big part of the LPE Stingray program was their chief engineer Graham Behan; a man who was also involved with the development of the LT5 engine that powered the 1990 Corvette ZR1.

"The 2014 Corvette Stingray is one of the most exciting new cars in years and the Lingenfelter team wasted no time in turning out a series of highly-anticipated performance upgrades that deliver uncompromising drivability in addition to horsepower," said Ken Lingenfelter, CEO/Owner, Lingenfelter Performance Engineering. "We're privileged to have such talented engineers on our team, whose level of passion for performance drives them to produce reliable, road-ready systems."

Naturally Aspired Options
Those 2014 and 2015 Chevrolet Corvette Stingray owners who want more power, but want to preserve the naturally aspirated induction setup can pick from three different Lingenfelter packages. The first adds CNC ported cylinder heads, a custom camshaft and an engine calibration to produce 550 horsepower. The second also starts with the CNC cylinder heads, but this package included exhaust headers and a more aggressive camshaft – which with proper tuning will provide 600 horsepower. Finally, those who want the most N/A power from an LPE package can pick the third option, which begins by changing the stroke of the engine – enlarging it from 376 cubic inches to 417 cubic inches. This engine volume is achieved through a stroker kit that adds a new crankshaft, connecting rods and forged pistons along with all of the components of the 600hp package.

Supercharged Options
Those who want more power from their C7 Corvette Stingray and would prefer the sweet whine of a supercharged, Lingenfelter has you covered with three forced induction packages. The first is the LPE supercharger installed on an otherwise stock engine and tuned to produce 640 horsepower (as much as the SRT Viper). Next, the second level package begins with the supercharger and adds CNC ported cylinder heads and a custom camshaft, bringing the LT1 up to 700 horsepower. Finally, Lingenfelter’s current top of the line package for the 2014/2015 Stingray increases the engine size from 376 to 417 cubic inches with a similar stroker kit to the N/A option, but with the addition of the LPE supercharger power numbers grow to 750 horsepower – enough to most certainly give the big bad Hellcat a run for its money.

Other LPE Stingray Options
In addition to these six Performance Series packages, LPE offers custom builds and some twin turbocharged applications for the Corvette Stingray owner who wants to take a difference approach to monster power. Those who want to add a little more flash and flare to their LPE-built Stingray can also opt for features like wheel/tire packages, high performance braking systems, suspension upgrades, exterior components and interior features that allow an LPE Corvette to stand out in a crowd.

"Lingenfelter has been known as the go-to source for new Corvette performance for nearly 40 years and that legacy continues with the C7," said Lingenfelter.

Elon Makes a Cybertruck Statement With an Action, But Quiet in Words
Tesla's Record Month in China: Doubled Registrations in March 2021
END_OF_DOCUMENT_TOKEN_TO_BE_REPLACED