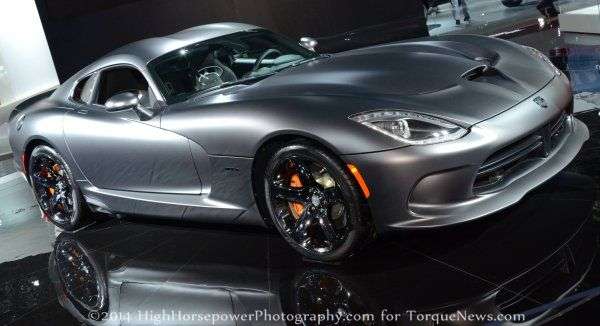 There is a good chance that when the new Dodge Viper arrives in 2015, less than 500 Dodge dealerships around the country will be able to sell the newest Mopar supercar due to the requirements set forth by the Chrysler Group management to sell the Viper under the short-lived SRT brand.
Advertisement

When the Chrysler Group introduced the 2013 SRT Viper as a car in a brand of its own, the company laid out a handful of fairly strict requirements for those dealerships who wanted to be able to service and/or sell the new supercar. The dealerships had to first pay $5,000 to become an approved SRT dealership, which included tools, training, equipment, signage and ordering priority in getting other SRT models like the Charger, Challenger and Grand Cherokee. Those dealerships that paid that 5k fee to become an approved SRT dealer who also wanted to be able to sell the Viper were required to then pay an additional $20,000. When the program was first launched, it was expected that 100-150 of the 2300 dealerships in the country would buy into the SRT program, but according to Larry Vellequette at Automotive News, “nearly 500” dealerships eventually ponied up the $25,000 to sell and service the mighty Viper.

As you can probably imagine, after these dealerships paid $25,000 to be an official SRT brand store and sell the newest Viper, the prospect of the SRT brand being absorbed into the Dodge brand has the originally approved SRT dealerships a little peeved. Imagine if your business paid $25,000 to sell a given product, only to have a similar business in the next town over selling the same product without that fee…you would be upset too. Folding SRT into Dodge and making the SRT Viper the Dodge Viper could possibly allow every Dodge dealership in the country to sell the Viper without dealing with the requirements of the 500-ish SRT brand dealerships.

With all of this in mind, the Chrysler Group seemingly has two options. They can either upset nearly 500 dealerships by letting other dealerships service and sell the Viper without any of the SRT brand requirements or they can continue to restrict sales and service to those approved dealerships. The biggest issue is that there is a pretty good chance that a great many of the 500 dealerships who jumped through the $25,000 hoop are among the Chrysler Group’s best performing dealerships. Figure, to have the kind of money needed to spend $25,000 on a vehicle that you might sell a handful of each year, it needs to be a pretty large dealership with enough sales of the higher volume cars to afford showroom floor eye candy like the Viper.

Is the Chrysler Group really going to burn a large group of their most successful dealerships? Probably not. Instead, we can almost expect that when the new Dodge Viper arrives in 2015, it will still sport the “SRT” badging and it will still be offered to dealerships through this same exclusive program. Over time, the company may loosen the requirements to sell and service the Viper but in the short term, any Dodge fans who are expecting to see a new Viper at their local low volume Dodge dealership shouldn’t hold their breath. If nothing else, the Chrysler Group will likely require the rest of the Dodge dealerships who want to deal with the Viper in any way to pay for the tools, training, equipment and signage that the approved SRT shops had to acquire.