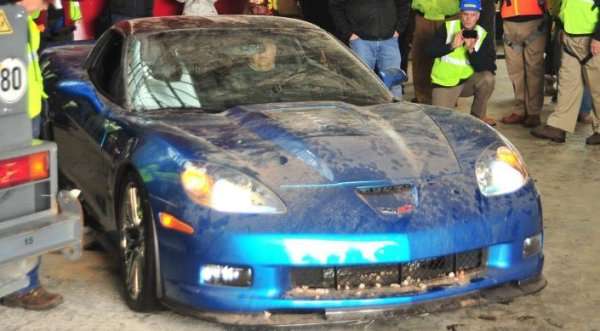 If you were planning to make a trip to Bowling Green Kentucky to visit the National Corvette Museum to view the 8 cars damaged by the sinkhole back in February you had better plan your trip very soon, as the first of the Great 8 – the Corvette ZR1 Blue Devil – is scheduled to head to Michigan for a full repair in early September.
Advertisement

On February 12th 2014 at around 5:45am, the floor of the Skydome area at the National Corvette Museum in Bowling Green Kentucky opened up, swallowing 8 historically significant examples of the Chevrolet Corvette. A large sinkhole under the museum had weakened the floor and as the earth under the floor gave way – so did the floor itself. Within a very short period of time, a large section in the middle of the Skydome floor collapsed, taking 8 Corvettes some 30 to 40 feet into the ground along with debris from the structure itself.

When the recovery team began removing the cars from the hole, the first to be lifted out was the 2009 Chevrolet Corvette ZR1 test car named the Blue Devil. The Blue Devil was the least damaged, as it was essentially sitting on top of the rubble, and it was in such good shape that it was able to be driven away once it was back on Terra Firma. Fittingly, the first car to come out of the hole will be the first of the damaged Corvettes to be shipped to Michigan, where General Motors will restore the car back to its original, museum quality form.

The Sinkhole Creates a Popular New Display
Once the folks who call all of the shots at the National Corvette Museum had a chance to catch their breath following the unfortunate events of February 12th, they decided that the 8 cars in the sinkhole would be exhumed and assembled in a display that specifically focuses on the natural disaster. While the sinkhole is a sad part of Corvette history, it is still a part of Corvette history so it was fitting that the Museum opted to create a display to show attendees just how much fury the Mother Nature can unleash – even with the best laid plans. In the long run, the sinkhole created a tremendous amount of attention for the museum, which lead to a big influx in attendee traffic as Corvette fans from around the world flocked to Bowling Green to see the damaged cars that became known as the Great Eight.

However, General Motors stepped up right after the sinkhole happened, announcing that the company would take back all 8 of the damage Corvettes for a full repair. Of course, that was before all of the cars were removed from the hole – some of which were so badly damaged that they were totally unrecognizable. That would lead me to believe that some of them will not be restored, but in any case, General Motors will repair those vehicles that are in good enough shape to actually be fixed.

While GM’s offer to fix the damaged cars in the Corvette Museum is great news and a very generous move by the automaker, the downside is that once the cars are shipped to Michigan for repairs – the museum’s sinkhole exhibit will become incomplete. It has been announced that the Blue Devil Corvette ZR1 will head to the Metro Detroit are sometime after September 1st, meaning that there are only about three weeks left to catch the National Corvette Museum sinkhole exhibit in its entirety.

The Sinkhole Itself Will Be Preserved
Shortly after it was announced that the Corvettes damaged in the sinkhole would be restored, some fans suggested that some of the cars – at least the most badly damaged cars – should be left damaged as part of a permanent display. That aspect is still unclear, but the NCM management has decided that the hole in the floor of the Skydome will be reinforced and once completed – it will become a permanent display at the museum. This way, attendees will be able to see the incredible damage first hand, even after the 8 Corvettes that fell into the hole have been repaired or replaced (one car – the Ruby Red 40thAnniversary Edition has already been replaced).

So, while it seems that folks visiting the National Corvette Museum will be able to see the sinkhole itself well into the foreseeable future, time is running out to see the Great Eight in their damaged form. If you want to see all of the cars before anything has been fixed, you should really plan to visit the museum before the end of August.