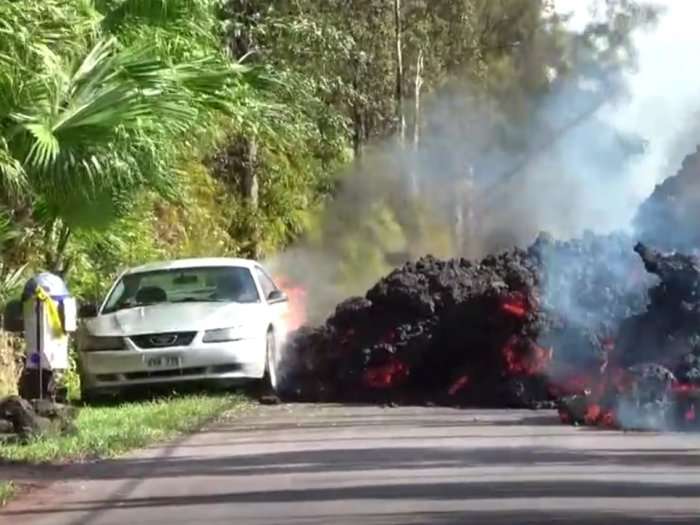 Hawaii's Kilauea volcano on “the Big Island” has been spewing hot lava for the past few days, creating a river or molten liquid rock that is devouring everything in its path – including a silver Ford Mustang.
Advertisement

Since 1983, Hawaii's Kilauea volcano has been active, occasionally flaring up and sending lava up to the crust of the planet, but last Thursday, the volcano had its largest eruption in years. As a result, lava was sent flowing through the wilderness and neighborhoods of the Big Island accompanied by clouds of toxic sulfur dioxide. After the initial flow of lava began, the area has been rocked with earthquakes, so things are rough for folks in the 50th state right now.

According to a variety of sources, some three dozen homes and other structures have been destroyed by the lava and with the slow, unstoppable travel of the molten rock continuing, there is likely to be more damage in the coming days.

One video was captured by a guy name Brandon Clement, who filmed as the lava flow engulfed a 1999-2004 Ford Mustang. We don’t know why the owner didn’t move the car when the time came to evacuate the area, but the car was clearly no match for the full force of the Earth’s inner fury.

As we can see in the video below, the flowing, molten rock closes in on the Mustang quickly. As the lava contacts the car, portions of the car burst into flames and in less than a few minutes, the lava has completely encased the car…or completely melted it. I’m not sure. Lava is said to range from 1,300 to 2,200 Fahrenheit. Steel melts around 1,300 degrees, so the metal body likely melted and mixed with the lava while everything else in the car would have burned up as the lava passed over it. Even if it doesn’t completely melt, it will be encased in volcanic rock when things are all said and done.

It is a troubling time in Hawaii and this video shows the unstoppable, destructive force of a lava flow.