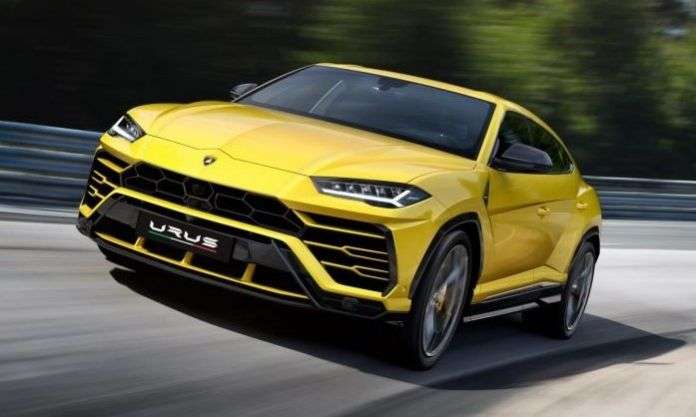 The Lamborghini Urus Arrives to Struggle with the Jeep Trackhawk

After years of waiting, the Lamborghini Urus high performance SUV was finally introduced today and as the newest competitor to the Hellcat Hemi-powered Jeep Trackhawk, Lambo’s first modern super-SUV could have a tough time beating the supercharged Grand Cherokee.
Advertisement

The Lamborghini Urus Concept was introduced back in 2012 and after 5 years of waiting, the production version of the high performance Italian SUV has arrived. It looks a little different than the concept, but with 5 years’ worth of new exterior designs coming from Lamborghini – we expected some changes on the outside. Ultimately, the exterior appearance doesn’t matter, as Lamborghini can put whatever extreme angles they want on a vehicle and deep-pocketed socialites will buy one. We can expect the Urus to be a popular option with professional athletes, the Hollywood elite and plenty of kids buying cars with Daddy’s money on YouTube simply because it is the hot new Lamborghini.

Where the new Urus will meet the stiffest competition is among those buyers who are focused on performance, in which case the newest Lamborghini will go toe-to-toe with the 2018 Jeep Grand Cherokee. Based on the initial numbers, the Lambo might outrun the Jeep on a long, high speed run, but with more horsepower, more torque and quicker low-end-performance numbers – the Trackhawk still leads the segment.

Urus Vs Trackhawk
The 2019 Lamborghini Urus is powered byy a 4.0L twin turbo V8 which delivers 641 horsepower and 627lb-ft of torque to all four wheels via an 8-speed automatic transmission and an advanced all-wheel drive system. The 2018 Jeep Grand Cherokee Trackhawk is powered by a supercharged 6.2L V8 with 707 horsepower and 645lb-ft of torque, giving the American SUV a healthy advantage in both power measures over the Italian model.

According to official numbers, the 2019 Lamborghini Urus will dash from 0-60 in 3.6 seconds while hitting a top speed of 190 miles per hour. The Jeep Trackhawk has a top speed of “only” 180 miles per hour and it will officially get to 60mph in just 3.5 seconds, but there is more to the real-world battle.

During media testing with the 2018 Jeep Grand Cherokee Trackhawk, several people got to 60mph in just 3.3 seconds. I personally made a handful of runs in 3.4 seconds and my worst run was 3.7 seconds with the tires spinning. In other words, the 3.5-second 0-60 time for the Trackhawk is fairly conservative, so it is a number that people will be able to hit without much practice. It is unclear whether the Urus will be able to outrun those official times, but based on the real world numbers from Jeep testing – folks with the Lamborghini SUV will have to run their best numbers to keep up with the Hellcat-powered Grand Cherokee.

So, the 2019 Lamborghini Urus will beat the Grand Cherokee Trackhawk on the top end and it might keep up in a short sprint, but there is one area (aside from power) where the Jeep crushes the Lambo – pricing. The Trackhawk starts in the mid-$80k-range and when loaded, gets up over $100k. On the other hand, European prices for the Urus are expected to start around £165,000, which is just north of $222,000 USD. No US prices have been announced, but we can expect it to have a starting price right around $200,000, so it costs more than twice as much as the Trackhawk.

Those folks buying the Lamborghini Urus simply because it is a Lambo likely wont be cross-shopping the Jeep Trackhawk, but for those shoppers looking for the most bang-for-the-buck, the Trackhawk is still the easy choice.

Armen Hareyan wrote on January 23, 2018 - 10:11am Permalink
Thank you Patrick. According to Top Speed in terms of performance, the Jeep Grand Cherokee Trackhawk has a little advantage over Lamborghini Urus. "The Jeep's secret weapon is its 6.2-liter supercharged Hemi V-8 engine that pumps out an incredible 707 horsepower and 645 pound-feet of torque."