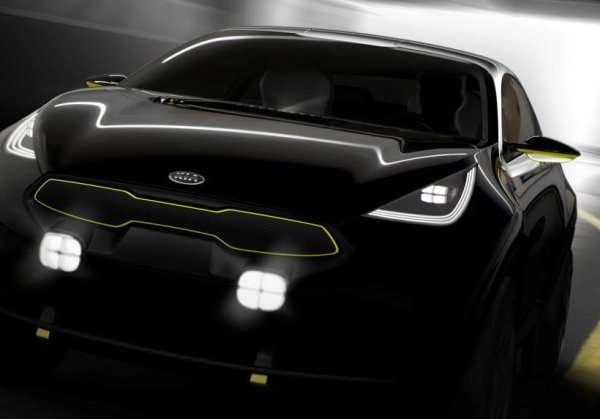 Kia has offered up a pair of teasers showing off a new B-segment compact coupe that will debut at the upcoming Frankfurt Motor Show and while these early shots show features that will likely not make it past the concept stages – this new compact could offer up some hints to the future of Kia vehicle design.
Advertisement

So far, we have two teasers images of the upcoming Kia B-segment compact – one of the interior that seemingly reveals an interesting door design along with a strictly conceptual seating setup and a second shot that provides a shadowy look at the front end.

The darkened front angle teaser of the new Kia B-segment concept shows a few familiar features of the current Kia lineup including the distinct grille shape that is used across the entire lineup and the four quadrant fog lights that will be featured on select 2014 Optima models.  The four quadrant lighting design is also used in the headlights where this quad design appears in the middle of the headlight housings with three light bars trimming the lower side of each providing a very high tech look.

I took the liberty of taking the front end image and enhancing it to bring out some details (below) that we originally couldn’t see in the front end teaser image from Kia.  When we made the image a bit uglier, the front end lines of the car came into focus.  It also appears that this car is surprisingly high riding, evident by the amount of light that we can see under the front end and in the shaping of the sides of the car. The second teaser shot shows the interior of the new Kia B-segment concept from above – which also indicates that this car will have a very production-unfriendly door opening that extends up into the roof. Of course, this image could have been generated to better show the unique interior design and create discussion but it could also give us our first look at a door design that is very unlikely to see production in the near future. Beyond the unusual door opening, the Kia B-segment compact concept headed to Frankfurt has an interior that screams “just a concept”.  The dash is ultra curvy and minimally decorated with some high tech buttons with what looks to be fixed posts running from the center console to the dash offering some function in addition to the unique form.  The driver’s side post has a control that appears to rotate around the post to select the gear and the passenger’s side post has what appears to be buttons – although the markings are too small for me to make out (shown below).  There is also a very sporty flat bottomed steering wheel with shift paddles but the most striking bit of interior information is the seating layout.  It appears as though this car has a molded, one piece seating setup that incorporates both the driver and passenger seat.  By definition, that means that this car has a sort of bench seat and while that looks great for concept use – it is incredibly impractical for production use.  It looks cool until you have a 5 foot tall driver move the seat way up so that he or she can reach the peddles and the 6’5” passenger is crushed against the dash. The new Kia B-segment compact concept will make its formal design on September 10th at the Frankfurt Motor Show.  It should be noted that Kia has specifically stated that there is no intention to turn this Frankfurt bound concept car into a production model but the Korean automaker will use the German show to gauge the response of the industry.  The brief press release also talks quite a bit about how this car is being designed for the European market so this new B-segment coupe may not be a model bound for the US.   However, with so many automakers offering cars in the US that had previously succeeded in Europe, Kia could use the European market as a test market for the rest of the world.  That is, of course, if this concept car proves to be popular enough to inspire a future production vehicle.

While there are aspects of the Kia B-segment compact coupe that would be very unlikely to see production – like the thin side mirrors, the high tech lighting setup and the one piece front seat – the basic design of this upcoming concept looks very much (in these teasers) like a car that would comfortably fit into the current Kia lineup.  With just a few tweaks, this B-segment concept could become the next generation Kia Rio.