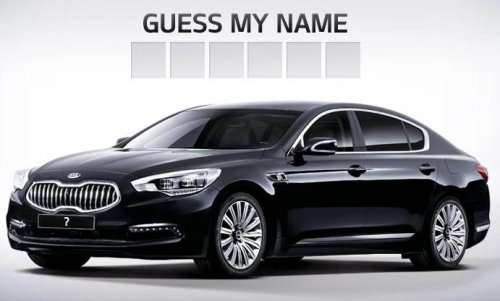 Kia K9 to be named Kia Quoris in the US

The new rear wheel drive Kia flagship sedan has previously been known as the K9 and while that name will exist in the Korean market, the new full sized sedan sold in the US will be named the Kia Quoris.
Advertisement

The new Kia Quoris name was teased last night when the Kia Facebook page posted the image on the right, asking fans to guess the new name and they offered the clues that the name was derived from the English words “Quality” and “Core”, it started with Q and contained the letters S, Q, I, R, U, and O. This morning, the Korean automaker issued a release announcing the new Quoris name. You might be reading the name Kia Quoris out loud, trying to figure out how to pronounce it while questioning the origin of the word. My first thought was that it was a “western” spelling of a Korean word but in actuality, Quoris is a word that the automaker created to serve as the name of their new flagship sedan in the US.

"Derived from the English words 'core' and 'quality', the name of our new flagship sedan hints at the attributes at the very heart of the vehicle. The word 'Quoris' conveys solidity, luxury and high-technology, all resonating together as a chorus,” said Thomas Oh, Kia's Executive Vice President & COO of the International Business Division. “Our decision to give this striking new sedan an unconventional name means it will stand out even further from the established crowd, driving Kia sales in what is a new segment of the global automotive market for Kia.”

The Kia Quoris is based on the Hyundai Equus sedan and although the Quoris is a shade shorter, we can expect it to offer similar levels of goodies inside while more of a sporty direction than the super luxury aim of the Equus. Unfortunately, one key difference between the Kia Quoris and the Hyundai Equus is that the Kia flagship will likely not offer the 429 horsepower Tau V8 found in the Equus. In the Korean market, the K9 relies on a 285 horsepower V6 although we expect that the Kia Quoris coming to America will offer a more powerful version of the same 3.8L gasoline direct injection (GDI) engine. This engine is currently being used in the Hyundai Genesis Sedan and Coupe, offering 333 horsepower in the sedan while the two-door Genesis Coupe packs 348 horsepower. While it is a far cry from the 429 horsepower V8 in the Equus – a 330-ish horsepower V6 mated to an 8-speed transmission should make the Kia Quoris fun to drive while also offering great fuel economy.

The Kia Quoris rear wheel drive sedan will include some innovative high tech safety gadgets including Advanced Smart Cruise Control (ASCC), Advanced Vehicle Safety Management (AVSM) and Blind Spot Detection with Lane Change Assistance. These systems make driving easier while also helping to make the roads safer for everyone – not just the driver and passengers in the Quoris.

The Advanced Smart Cruise Control is a cool new adaptive cruise control system that allows the driver to set the desired distance between themselves and the vehicle in front of them. Once the cruise is set, as the Kia Quoris approaches another vehicle it will get to the desired range and then pace the car in front. Once that other car changes lanes or turns off, the Quoris returns to the original cruise set speed. This system also allows the car to come completely to a stop if the vehicle in front is stopping and so long as the car in front moves within three seconds, the Quoris will accelerate back to the desired speed accordingly. This portion of the system allows the Quoris to adapt to a car that is slowing to turn where a normal cruise control system would have to be de-activated and then reset when a car slows to turn.

Ultimately, if the direction of the current Kia lineup and the awesomeness of the Hyundai Equus sedan are any indication, the Kia Quoris sedan should be a pretty impressive new flagship for Kia in the US. However, it will be interesting to see how the American consumer feels about the odd name. My opinion is that K9 may have been the better choice but there may have been too much animal connection for Kia with their domestic market name. The Kia lineup is very impressive – hopefully the public doesn’t shun this new flagship rear wheel drive sedan due to its unusual name.

The Kia Quoris will hit dealerships in the fourth quarter of 2012 in the US and other markets around the world.

Toyota's First EV Will Have a Name of BZ: Toyota BZ
First Videos From Inside The Boring Company's Las Vegas Loop
END_OF_DOCUMENT_TOKEN_TO_BE_REPLACED