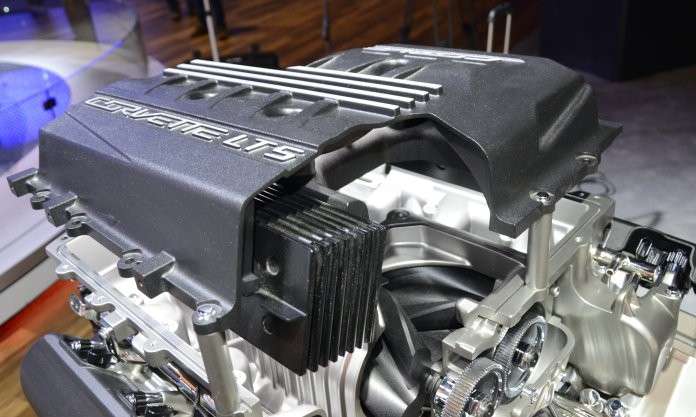 The Key to a Camaro Running the Nurburgring in 6 Minutes

Chevrolet Camaro Lead Engineer Al Oppenheiser recently told Hagerty that he would like to see a Camaro run a sub-7-minute lap at the Nurburgring and with the need to shave more than 16 seconds to do so, the first step towards that increase in performance is the new LT5 V8 from the Corvette ZR1.
Advertisement

Al Oppenheiser had a long, interesting conversation with the people from Hagerty.com at the 2018 North American International Auto Show in Detroit, where he discussed all sorts of hot industry topics. At the end of that interview, the Chevy muscle car mastermind said that he would like to see a Camaro run the Nurburgring in under 7 minutes.

We would like to see it, too, and we know what Chevrolet needs to do to get a Camaro into the incredible 6-minute range at “The Ring”. They need to install the new LT5 V8 from the 2019 Corvette ZR1 into the Camaro.

Oppenheiser’s 6-Minute Comment
For those who haven’t read that initial interview, here is the exact exchange from Hagerty.com with Brandan Gillogly that led to this discussion.

Brandan Gillogly: The Viper ACR went out with a bang by setting lap records at 13 different tracks around the country. Are there any of the Viper’s lap times you looked at and thought you could take down with the ZL1 1LE?
Al Oppenheiser: I think there are. As always, any driver will get out of the car and say there’s more in it. We think there’s more in it. We’re gonna keep tinkering around with it. Wouldn’t it be cool to see a Camaro under 7:00 at the Nurburgring? I’d like to see it.

So, for Oppenheiser to want the Camaro to run the Ring in under 7:00, it would need to climb into the vaunted 6-minute range. Mind you, the Dodge Viper was only able to get down to 7:01 due to tire issues, but in stock form, no American production car has ever run a 6-anything at the Nurburgring.

Based on the Camaro boss’s comments, the team is still working on ZL1 1LE and they could very well come up with new features to improve performance and lower lap times. The simplest addition, of course, would be a whole lot more power and it just so happens that Chevrolet has an engine with a whole lot more power.

The 755-horsepower from the new Corvette ZR1 could be the key to seeing a 6-minute lap time from the Camaro on the Nurburgring.

Might an LT5 Camaro Happen?
The current Camaro ZL1 1LE turned in the fastest Nurburgring lap time ever, blasting around Green Hell in just 7 minutes and 16 seconds. This means that to run in the 6-minute range, the team needs to cut about 17 seconds from their previous best time. It doesn’t seem realistic to expect that the company will actually be able to make suspension, braking or aero tweaks to shave 17 seconds, but a combination of those improvements with a bunch more power would stand a far better chance of running in the 6s.

With that in mind, it seems possible that Chevrolet could eventually offer an LT5-powered Camaro – possibly called the new Z28 – but it isn’t going to happen right away. Right now, the 2019 Corvette ZR1 is big news thanks to its 755-horsepower, supercharged LT5 V8. Introducing another LT5-powered car will take some attention away from the new super-Vette, so the company almost certainly will not roll out another car with this new engine within the next year.

However, once the new ZR1 has had some time to dominate the market, GM will likely be looking for somewhere else to use the new LT5. The Camaro is the most-likely option to get the LT5 next and with more than 700 horsepower, that engine could help Chevrolet offer the first muscle car to run the Nurburgring in less than 7 minutes flat.

Derrick wrote on February 1, 2018 - 10:17pm Permalink
Interesting read... but I don't think the LT5 happens in the current 6th gen Camaro. More to the point, power isn't the issue for the Camaro, as it actually has more power than the outgoing Viper had. The issue is weight. It's roughly 470lbs heavier... and simply gutting the car for lighter wheels/interior isn't going to net you half of that weight.... so the next step has to be looking at CF or aluminum for specific body panels... The car unofficially ran a 7:13 as it is...all of the cars ahead of the ZL1 1LE on the list are 2x or more the cost (the Viper is the only one not 2x, about 1x the cost), non-road cars, AWD, or a combination of the 3. I would also wonder if the A10 transmission might not be of help here too... because it's rapid fire shifting puts a gap of about a second in the 1/4 between the M6 and the A10 ZL1's