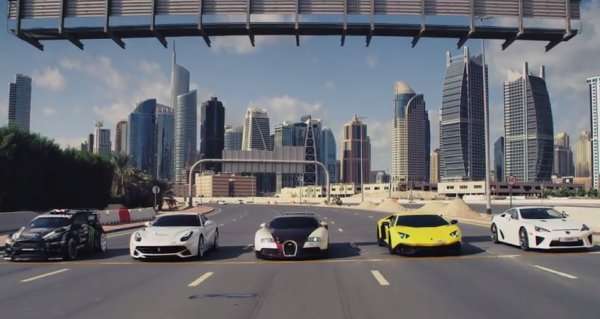 The Original Hoonigan Ken Block has rolled out the 8th chapter of his legendary Gymkhana video series, this time tearing up the streets of Dubai in his 650hp Ford Fiesta ST rally car with cameo appearances by a Ford F150 Raptor, the new Ford GT supercar and the incredible high performance exotics of the Dubai police force.
Advertisement

Last week we brought you a first look at Ken Block’s newest Ford Fiesta ST rally car that would formally debut in the new Gymkhana 8 video. Block’s Fiesta has a wicked new paint scheme that changes depending on how light hits the reflective surfaces and the world’s greatest Hoonigan also has a new sponsor in Toyo Tires – both of which are on display in his newest action-packed driving video.

Gymkhana 8
The odds are very good that if you are reading this, you know all about Ken Block and his Gymkhana videos. Block is a seasoned off-road racer, but he also possesses the ability to make cars do things that seem just short of impossible. He jumps, slides and spins the car through all sorts of obstacles in a unique setting for each video. We have seen Ken Block and his rally car storm through a movie studio, through the streets of San Francisco and through specially designed courses, but this time, he has taken his Hoonage on a global tour.

Here is a quick look at what goes on in Gymkhana 8.

Gymkhana 8 takes places on the streets of Dubai, and while Ken Block has closed down other streets and cities to film a video, it is crazy to think how much space on Dubai’s streets needed to be cleared for this video to happen. This video gives us a look at the sites of Dubai as Block and his 650hp Fiesta wreak havoc both in the desert and in the luxurious city.

Early on, we get our first cameo in the form of the Dubai police force’s fleet of exotics. Dubai is well known for having some of the highest performance police cars in the world, and 11 of them are in display in Gymkhana 8. We see the Jaguar F-Type, the Porsche Panamera, the Mercedes Benz SLS AMG, the Audi R8, the Ferrari 512, the Ford Mustang GT, the McLaren MP4-12C, the Porsche 911 GT3-RS, the BMW i8, a Maserati Gran Turismo and a Mercedes AMG G-Wagon lined up to form a very tight square – which Block flies into and then drifts around a few times before driving away.

Next up, Block approaches a Ford Raptor F150 doing a little sidewall skiing, so as the truck drives along while carefully balanced on the passenger’s side wheels, the Fiesta drifts around a very close proximity.

The Drag Race
Finally, one of my favorite parts of Gymkhana 8 shows Ken Block line up in his 650hp Ford Fiesta ST rally car in an epic street race against the Ferrari 512 Berlinetta, the Bugatti Veyron, the Lamborghini Aventador and the Lexus LFA. When the light turns green, the Fiesta hops out to an early lead, followed by the Bugatti, the Lambo, the Ferrari and the Lexus.

After this awesome drag race, the video continues on for several more minutes as Ken Block shows us the sights of Dubai from a series of GoPro cameras. My description can only do this video so much justice, so enough of this – crank up your speakers and enjoy Ken Block’s Gymkhana 8!