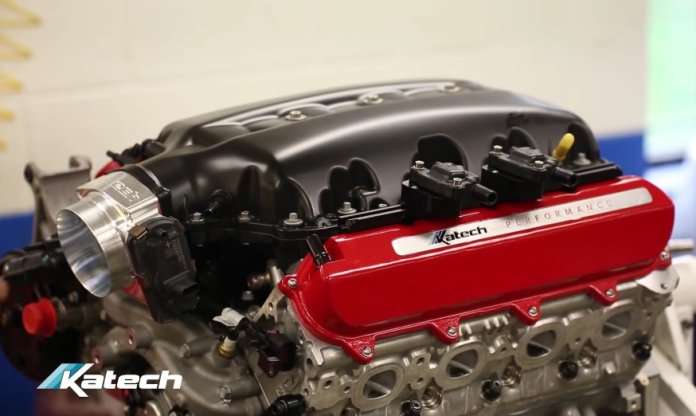 The C7 Chevrolet Corvette Grand Sport is designed to be a road-handling monster with the power of the Stingray, but for those racers who want the great handling and far more power without stepping up to the supercharged Z06, the folks at Katech have you covered with their Street Attack 427 engine package – delivering just south of 700 horsepower.
Advertisement

The C7 Chevrolet Corvette is offered in three basic trimlines – the Stingray, the Grand Sport and the Z06 – and a fourth will arrive for 2018 with the new ZR1. The Z06 and ZR1 each have unique engines, with the supercharged LT4 and LT5 engines motivating the top-of-the-line Chevy supercars. On the other hand, the Stingray and Grand Sport share the 460hp LT1, with the Grand Sport coming with many of the handling goodies from the Z06 to create the most cost-effective road racing C7 Corvette.

However, what do you do if you want a Grand Sport with big power? You call Katech Engines in Michigan and ask about their Street Attack 427 engine package for the C7 Corvette with the LT1 engine.

The Katech Street Attack 427
As you can see in the video below, the Katech Street Attack 427 package for the C7 Corvette Grand Sport involves removing and building the standard LT1 engine. The engine block is bored and stroked, lifting the displacement from 6.2 to 7.0 liters, followed by fitting that larger engine with worked cylinder heads, a new camshaft, a new rotating assembly, headers and the rest of the items needed to lift the output from 460 to 699 horsepower.

Now, while some of you might wonder why a Grand Sport owner wouldn’t go the “easy” route and switch to a supercharged or turbocharged build, keep in mind that this C7 Corvette is built for handling. Adding the forced induction components would add weight over the front wheels, offsetting the ideal factory balance of the car. The Katech Street Attack 427 package allows Grand Sport owners to enjoy even more power than Z06 owners in a lighter package.

The only downside to this package is the price, as an entire engine build doesn’t come cheap. To be exact, this 427 build costs $23,633, so when added to the base MSRP of a 2017 Grand Sport coupe with a manual transmission ($68,315), the built price comes to $91,948 before any other expenses are added in. For that price, you could buy a heavily appointed Z06, but for those who really want a 699hp Grand Sport – this is the best deal going.

Check out the video below for a look at the engine build, the dyno run and a little street action with the 427-powered C7 Corvette Grand Sport.