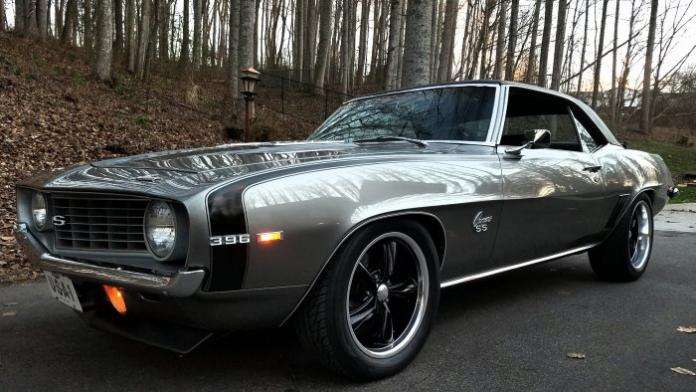 The TorqueNews/Camaros Unlimited Camaro of the Month for July 2017 is this beautiful 1969 Chevrolet Camaro SS owned by Robert Drury.
Advertisement

Each month, TorqueNews works with the members from the Camaros Unlimited Facebook page to select our Camaro of the Month. The process begins with the members of the Camaros Unlimited Facebook page – numbering nearly 41,000 strong – nominating their favorite Chevrolet Camaro owned by a fellow member of the page. Once five cars/owners have been nominated, the voting begins and when the balloting closes – we have our Camaro of the Month.

For July 2017, the Camaro of the Month is this sharp 1969 Camaro SS shown above, owned by Robert Drury. We spoke to Robert about his sweet Chevy muscle car and this is his story.

Robert Drury’s 1969 Camaro SS
I have owned several hot rods in my life time and have always loved the First Gen Camaro. My First Camaro I owned was a 1967 SS pro Street big tire beast that would blast the rear tires and pin ya to the seat. I loved that ride, but really wanted one that could be driven long distance and still have plenty of power to keep my interest. I sold the 67 and the search was on. I found this awesome 1969 Camaro SS in southern Georgia after months of looking and making long road trips . What caught my eye was the gray metallic paint topped off with the black vinyl top and the hounds tooth interior laid out by the previous owner. Of course the 3rd peddle and 4 speed sealed the deal. Already an awesome ride as it was, I could not leave well enough alone as with every hot rod I have owned and had to put my finishing touch on her.

First off, I gave her the name “Louise” after my wife Donna’s middle name (which she is not too fond of). She has supported my addiction to the awesome rides I have been blessed to own. This one I plan keep forever (wink wink). Louise is powered by a mildly built 454 BBC. Some of the changes she went through in my quest to make her better, first I changed to a Tremec TKO 600 to manage those ponies and unleash the torque she produces. Next was on to the fuel delivery. A FiTech Go EFI 4 600 Throttle Body Kit was installed. Fittead her with a TANKS fuel tank and fuel delivery system. Upgraded to a GM tilt column, installed 2” drop spindles, disc brakes and changed the wheels and tires for clearance to get that right stance. A 12 bolt with a 3.73 posi and Competition Engineering frame connectors installed. Changed to a smoked glass kit and detailed out the interior.

She is an awesome cruising 69 Camaro and a true blast to drive, able to get 18 MPG on the hwy, and able to rip the tread off the rear tires. Not bad for a semi old school BBC with air and a few modern upgrades. You can bet she will be out on the Hwy as much as I can cruising and having a blast. At this point she is finished for now, (well except for that pro charger that I keep day dreaming about). I guess they are never really finished.

I would like to thank the members of Camaros Unlimited for voting and selecting Louise. It is a real honor for me to represent Camaros Unlimited in TorqueNews. Thank you to TorqueNews for show casing our awesome rides. And special thanks to Jim and Jerry for making the long road trips with me in search of an awesome Camaro.