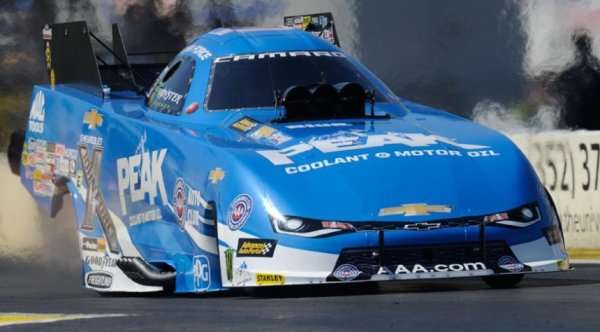 John Force Chevrolet Camaro Gets Win #1 at the Gatornationals

The John Force Racing team scored its first win of the 2017 NHRA season this past weekend as John Force drove his Peak Antifreeze Chevrolet Camaro funny car to the winner’s circle at the Gatornationals – racing to the win after qualifying in the top spot.
Advertisement

The 2017 Mello Yello Drag Racing Series opened with a fiery feud brewing between Don Schumacher Racing (DSR) and John Force Racing (JFR) after the team owners had an unpleasant exchange at the track over a manpower issue. A member of the Force team briefly jumped ship to work for Schumacher, only to head back over to JFR, leading to some angry public comments from Don Schumacher.

Schumacher’s team and their Dodge Chargers dominated the funny car class last season, leading to a championship for Ron Capps after the quartet of DSR drivers captured 14 wins in 26 events. They opened this season in similar fashion, with Matt Hagan winning each of the first two events of the season while the John Force Racing Camaro funny cars struggled…giving DSR the clear advantage in the funny car feud.

That all changed this past weekend at the Gatornationals, as the John Force Racing Camaros came off of the trailers fast and stayed fast all weekend long.

Qualifying
In the first round of qualifying, Ron Capps and his Dodge Charger turned in the quickest run with a time of 3.865, but John Force and his Chevrolet Camaro laid down the second quickest run of the round with a 3.869. Jack Beckman was third quickest with a time of 3.883 while Robert Hight was fourth in the class with a run of 3.885.

In the second round, Matt Hagan and his Dodge briefly claimed the top spot with a 3.854, but Robert Hight’s 3.844 and John Force’s 3.832 pushed Hagan to third quickest while the two Camaro funny cars claimed the top two spots.

Those times would stick through a slow third round of qualifying, although it should be noted that with a time of 3.888, John Force’s Camaro was the quickest car in round #3. Also, while a handful of drivers got into the 3.8X range in the fourth round of qualifying, no one would best the times of Force and Hight from round #2.

Eliminations
In the first round of eliminations, Courtney Force lost, but John Force and Robert Hight both won, with John beating Del Worsham while Hight beat Robert Tasca. Also, while 2 of the 3 JFR cars won in the first round, all four of the Schumacher Chargers advanced to the second round.`

In the second round, John Force ran the quickest pass of the round and beat Jack Beckman while Robert Hight lost to Toyota newcomer Jonnie Lindberg. Matt Hagan and Tommy Johnson Jr also advanced to the third round, setting up a Chevy-Dodge battle on one side of the bracket and a Toyota-Dodge battle on the other.

In the final four, John Force turned a starting line advantage into a comfortable win over Tommy Johnson Jr while Jonnie Lindberg turned the best time of the round to knock off Matt Hagan. This meant that for the first time in the short 2017 season, the Gatornationals was the first event without a DSR Dodge Charger in the finals while being the second time that a JFR Chevrolet Camaro made it to the final run of the event.

Just three races into the season, the rivalry between Don Schumacher Racing and John Force Racing is already shaping up to be an exciting one.