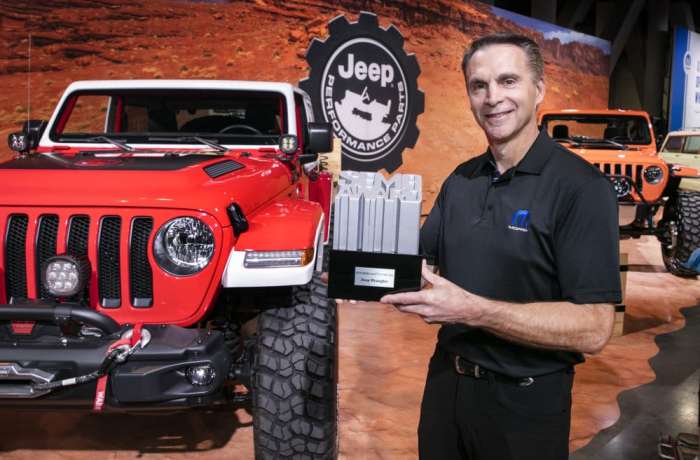 The organizers of the 2018 SEMA Show in Las Vegas have announced their annual awards and for the ninth-straight year, the Jeep Wrangler was named the Hottest SUV at SEMA – an award that it has literally never lost.
Advertisement

“The Jeep Wrangler continues to lead the way in the customization world following the Mopar brand’s introduction late last year of more than 200 Jeep Performance Parts and accessories,” said Steve Beahm, Head of Parts & Service (Mopar) and Passenger Car Brands, FCA - North America. “When it comes to personalization, Jeep Wrangler is a star of our portfolio and it just keeps getting hotter.”

SEMA Hottest Awards
The SEMA “Hottest awards” were introduced for the 2010 show, so 2018 marks the ninth year of the award proceedings. The award titles for the cars have changed a few times over the years, but two awards have been consistent – Hottest Truck and Hottest SUV. The Ford F-150, F-250, F-350 and F-450 have combined to help the F-Series win Hottest Truck eight out of nine years, but as the most popular SUV in attendance each and every year, the Jeep Wrangler has never lost Hottest SUV.

For the 2018 Hottest SUV award, the Wrangler beat the Chevrolet Tahoe and the Toyota 4Runner – neither of which had anywhere close to the sheer number of vehicles in attendance as the Jeep. However, this doesn’t come as much of a surprise.

In the world of sport utility vehicles, no model has lasted as long or proven to be as popular as the Wrangler. Jeep offers a long list of aftermarket upgrades but more importantly, pretty much every off-road aftermarket company in the world offers something for the Wrangler. At the SEMA Show, the vast majority of companies that focus on off-road performance utilize a Wrangler as their display vehicle, allowing the famous Jeep to win year after year.

“Once again, the Jeep Wrangler is voted as a favorite from the aftermarket community, with more exhibitors choosing the Jeep Wrangler as the SEMA ‘4x4/SUV of the Year,’” said SEMA President and CEO Chris Kersting. “Whether drivers are accessorizing the Jeep for off-roading or for everyday driving, there are outstanding options available for Jeep owners.”

In any case, the Jeep Wrangler has once again proven itself as the most popular SUV in the aftermarket world, taking home the 2018 Hottest SUV of SEMA award.