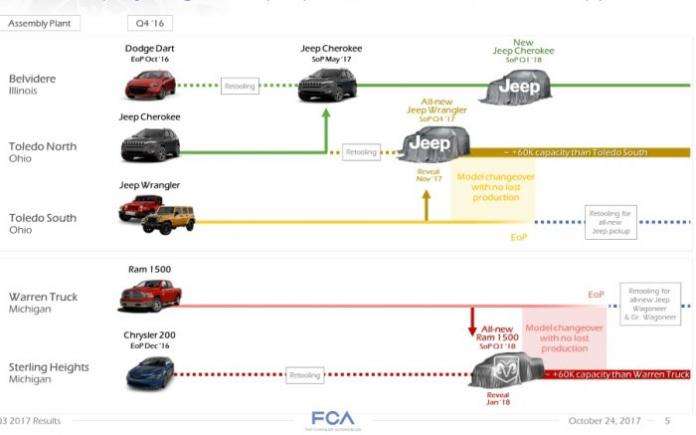 FCA has offered up some brief production details on the Jeep Wrangler Pickup, the Jeep Wagoneer and the Jeep Grand Wagoneer, proving that all of these new models are on track for production in the not-so-distant future.
Advertisement

FCA rolled out their third quarter financial results for 2017 and within that lengthy PDF is the chart shown above, which details some production plans for the Jeep and Ram Truck brands. To many people, the most critical information in this chart is the news that the next generation Jeep Wrangler will be revealed in November at the LA Auto Show, but others might be more interested in the rest of the Jeep updates.

Technically, this chart is intended to show upcoming production plans for five different assembly plants, but included in these timelines is a brief production update on the Jeep Wrangler Pickup, the Jeep Wagoneer, the Jeep Grand Wagoneer and the refreshed Jeep Cherokee.

The New Wrangler and the Wrangler Pickup
First up, we have news on the uber-popular Jeep Wrangler. We have known for some time that a new Wrangler is on its way and it has been expected that this next-gen Wrangler will also include a pickup variant. This chart points out that the new Wrangler will be revealed in November at the LA Auto Show with production starting at the Toledo North plant later this year. The current Wrangler is built at Toledo South, but with the shift of production to the North plant, the current Wrangler plant will be retooled to build the new Wrangler Pickup sometime during the 2018 calendar year.

These two new range-topping Jeep models will be built at the current Warren Truck Assembly Plant in Michigan. Ram 1500 production will transition to the Sterling Heights plant for the 2019 model year and when 2018 production ends, Warren will be retooled to build the Jeep Wagoneer and Grand Wagoneer.

We still don’t really know anything about these big Jeeps, but we can expect that they will be bigger than the Grand Cherokee, presumably adding a third row of seats and even higher levels of luxury in “Grand” trim. Based on this vague timeline, it looks as though these models will arrive later in 2018.

The New Jeep Cherokee
Finally, this chart confirms that production of the refreshed 2019 Jeep Cherokee will begin during the first quarter of 2018. We don’t know when this new Cherokee will be revealed, but when it is, we can expect a new face with a design that more-closely mimics the rest of the current Jeep lineup. The current Cherokee has sold well, but many critics focus on the unusual headlight design, so the company will likely make the 2019 Cherokee look more like the Grand Cherokee and the Compass.

Gene wilkins wrote on October 27, 2017 - 9:25am Permalink
Looking good can't wait to see the new ram
kaitlan wrote on November 8, 2017 - 12:27pm Permalink
i took some shots of it on the street the other night if you want to have them you can