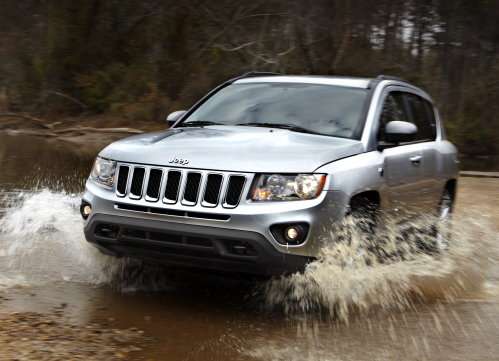 Jeep unveils the 2011 Compass with a Grand new look

Thanks to the pesky spyshot folks we have known for quite some time that the 2011 Jeep Compass would receive some styling cues from the 2011 Grand Cherokee but today, the Chrysler Group rolled out an array of images of their refreshed crossover along with a full complement of information on the new compact SUV.
Advertisement

As you can see in the image above, the 2011 Jeep Compass gets a heavy dose of exterior styling help from the new Grand Cherokee, almost looking like someone has photoshopped a new Grand Cherokee front end onto the smaller Jeep. The grille, headlights, low fascia details and foglight housings of the 2011 Compass are all very similar to the bigger Jeep with slightly different sculpting lines running from side to side. Of course, the smaller front end of the Compass causes the foglight positioning to vary a bit from the Grand Cherokee but when you look at the two side by side, there is no mistaking what the designers of the new Compass were going for when they drew up this new front end. Most importantly, other than the fact that the 2011 Compass looks a great deal like the top-selling Grand Cherokee, this new front end gives the compact SUV a ton more personality than the uber-bland front end of the 2010 Compass.

Click here for a gallery of the 2011 Jeep Compass.

Down the sides and across the rear, the 2011 Jeep Compass doesn’t receive many noticeable changes from the outgoing models shy of some sporty new LED taillights but the changes that Jeep has made to the front end, switching from the bug-eyed styling of the Wrangler to the sleek, sporty shape of the Grand Cherokee should help draw buyers to this smaller Jeep.

For those less concerned with aesthetics, the big news for the 2011 Jeep Compass is the fuel economy from the two available engine options. The entry level engine for the 2011 Compass is a 2.0L I4 making 158hp and 141lb-ft of torque and when mated to the 5-speed manual transmission this engine gets 23mpg around town and 29 on the highway. When you step up to the 2.4L engine, you benefit from additional power to the tune of 172hp and 165lb-ft of torque while also yielding 23/29mpg but more importantly, should you check the box for Jeep’s Freedom Drive all-wheel-drive system, the 2011 Compass still delivers a segment leading 28mpg.

One of the key complaints with many of the newer Jeep models is that they have gone away from their rugged off-roading roots in favor of a more city friendly, “soccer mom” personality but with the 2011 Compass, Jeep has gone so far as to label it as being Trail Rated. This implies that the new Compass will not only get great fuel economy but it will also be able to leave the paved tarmac without any problems as Jeep is usually not quick to throw around their Trail Rated designation without being sure that the SUV in question will handle the off-road world. While many buyers may not go after the 2011 Compass for its ability to go mudding, the improvements made to the new Compass will allow buyers that option should the need arise.

Inside, the 2011 Compass follows the same ideology as the rest of the new 2011 models from the Chrysler Group. Special attention has been paid to the fit and finish of the interior from top to bottom, so we can expect a heavy dose of soft and “super soft” touch materials on the door panels and dash, along with improvements in the gaps around the HVAC and stereo controls to give the 2011 Compass a more luxurious feel.

The 2011 Jeep Compass will be offered in three trimlines: Compass (the base model), Latitude and Limited with all three coming with a standard front wheel drive configuration with an optional Freedom Drive I or Freedom Drive II all-wheel drive system along with the option of the 5-speed manual transmission or the CVT2 automatic transmission. At launch, the Compass will be offered in 5 colors (Blackberry Pearl Coat, Bright Silver Metallic Clear Coat, Bright White Clear Coat, Brilliant Black Crystal Clear Coat, Deep Cherry Red Crystal Clear Coat) with limited availability for Deep Charcoal Gray and Mineral Gray Pearl coming shortly after the initial debut of the compact ute.

Jeep has stated that these new models could reach showrooms as soon as the end of this month so that would lead you to believe that production at the Belvedere Illinois production facility is about to begin. The 2011 Jeep Compass is expected to make its grand debut next month at the 2011 Detroit Auto Show and TorqueNews.com will be there covering the event so stay tuned for a closer look at the refreshed Compass.