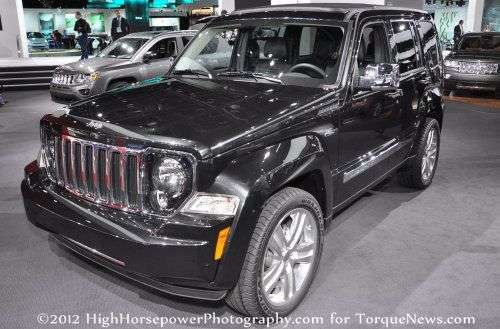 Bruce Baumhower, president of UAW Local 12 in Toledo Ohio recently told several sources that when the replacement for the Jeep Liberty meets the world, it will pack a new 3.2L Pentastar V6 that will likely offer more power and far better fuel economy than the current 3.7L mill currently standard in the 2012 Liberty.
Advertisement

Nothing else is known about the specs and features of the new 3.2L Pentastar V6, nor is there anything really known about the vehicle that will replace the aging Jeep Liberty. The Jeep Liberty had some monster sales years in the early 2000s with sales regularly topping reaching well over 160,000 units (the best year was 2001 with 171,212 Libertys sold) but those days are long past – with only about 116,000 sold in 2010 and 2011 combined. With the styling change for the 2008 model year, the sales of the Liberty dropped to between 43k and 66k over the past few years. While the change in styling clearly had something to do with the correlating plummet in sales figures but another reason that the Liberty has fallen from grace over the past few years is the antiquated 3.7L V6 engine.

The 3.7L V6 packed into the current Jeep Liberty makes 210 horsepower and 235lb-ft of torque while reaching fuel economy figures of 16 city/22 highway in rear wheel drive configuration and when fitted with four wheel drive, the mpg ratings drop to 15 city and 21 highway. The larger Jeep Grand Cherokee equipped with the larger 3.6L Pentastar makes a hefty 290 horsepower and 260lb-ft of torque while also achieving 23mpg on the highway and 17 around town. The 3.2L Pentastar could offer somewhere in the area of 250 horsepower, which would give it plenty more power than what the Jeep Liberty current offers but with a chassis that could be lighter than the current Liberty; the Pentastar technology could put this midsized SUV over 25 miles per gallon. This would give it better fuel economy than the Grand Cherokee while also offering a little less power – as to not step on the toes of the bigger brother.

That’s right – a 9-speed automatic transmission in the new Jeep.

ZF builds similar 8-speed automatic transmissions for the current Pentastar V6 powered Dodge Charger and Chrysler 300, helping those models to achieve 31 miles per gallon compared to the 27mpg that the previous 5-speed automatic transmissions offered (click here for more on the ZF 8-speed transmission). With this new 9-speed unit, perhaps the Jeep Liberty replacement could also get close to breaking the 30mpg mark, which would be an impressive feat for a roomy rear wheel drive midsized sport ute.

The replacement to the Jeep Liberty is expected to debut at the 2013 Detroit Auto Show and like the Liberty, the mystery sport utility vehicle will be built at the Toledo North Assembly Plant with the new 3.2L Pentastar V6 being built up I75 North at the Trenton North Engine Plant in Detroit. The current 3.6L Pentastar V6 is built right next door at the Trenton South Engine Plant, with over 1,000,000 versions of the impressive new engine built since the debut in 2010 in the Jeep Grand Cherokee. These two Detroit engine plants have been retooling and preparing for the massive influx of demand for the Pentastar engines, with company CEO Sergio Marchionne expecting the demand for the Pentastar V6 to be roughly 1.2 million units a year.