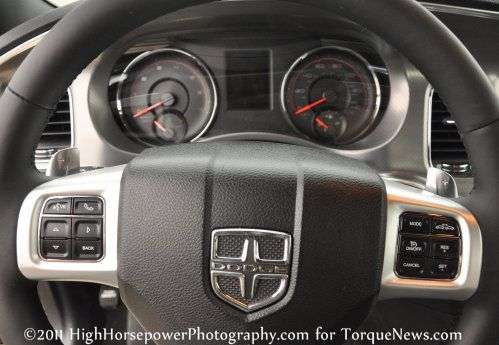 We have known for some time that the Chrysler Group would be introducing their new ZF-built 8-speed automatic transmission and today, the information on the new fuel-saving transmission has been made official and in 2012, the Dodge Charger and Chrysler 300 powered by the 3.6L Pentastar V6 will come with this new transmission option.
Advertisement

The 2012 Dodge Charger and Chrysler 300 sedans powered by the 292 horsepower Pentastar V6 and the new ZF 8-speed automatic transmission are expected to yield 19 miles per gallon around town (1mpg over the current V6 models with the 5-speed automatic transmission) and on the highway the new 8-speed transmission-equipped Charger and 300 will offer an impressive 31 miles per gallon – a 15% improvement over the 2011 models with the 5-speed gearbox. These specifications are for 2012 Charger and 300 models with rear wheel drive but after the initial launch, these new fuel-saving transmissions will also be offered with V6 all wheel drive models.

In the past, a transmission that would increase fuel economy measures by 15% without any change to the engine would have meant far less gearing thus less acceleration but thanks to the 8 available speeds, the 2012 Dodge Charger and Chrysler 300 can still provide strong low-end acceleration while having very low gearing to improve the MPGs. The 5-speed automatic transmission in the current V6 Charger and 300 have 5th gear as your overdrive gear with the first four gears set up to offer the best combination of acceleration while also trying to keep RPMs low. Acceleration is often hurt by the fact that the gearing needs to drop quickly as you get into the 3rd and 4th gear as you near the 5th gear (overdrive). However, with 8 speeds, the new ZF/Chrysler automatic transmission can offer more aggressive gearing through the first 5 gears with smaller steps between each gear to bolster acceleration while the 7th and 8th overdrive gears help the brawny sedans reach 31mpg on the highway.

The new Chrysler 8-speed automatic transmission will enter the world as a $1,000 option but you get more than just the transmission – you also get the innovative new slapstick-style console shifter with some great steering wheel mounted paddle shifters (the same ones used in the new SRT8 Grand Cherokee, Charger, Challenger and 300C – shown above on the right). The console shifter differs from your traditional PRNDL shifters as the new 8-speed shifter has just P, R, N, and D/S and unlike your normal shifter that moves to line up to each gear, the new 8-speed transmission uses a shift-by-wire system that allows the shifter to function more like a button; popping back to the middle after each shift. Also, once you ratchet the console shifter into the S (sport shift) mode, the driver has full control via the steering wheel mounted paddle shifters. Lots of companies offer steering wheel mounted shifters with varying success but in making these large, smooth paddles out of metal, they offer some extra styling while providing a driver-friendly shifting experience. Also, when in Sport shift mode, the transmission will shift harder from gear to gear as the driver moves through the cogs with the paddle shifters. All said and done, the 2012 Dodge Charger and Chrysler 300 with the 292hp Pentastar V6 and the 8-speed automatic transmission can dash from 0-60 in just 7.2 seconds – showing that you can have your fuel economy and your acceleration too.

Chrysler has become the first American company to offer an 8-speed transmission in the normal consumer market and with the vintage-styled console shifter and the well-done paddle shifters, the 2012 Dodge Charger and Chrysler 300 will surely be well-received by those who want improved fuel economy and a more engaging driving experience.