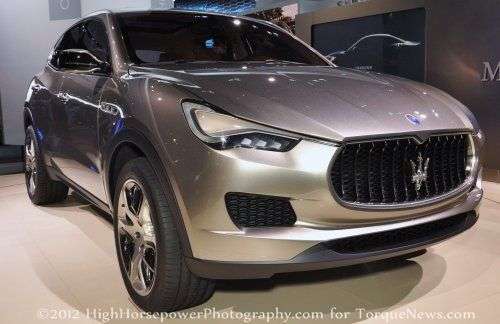 Jeep-based Maserati SUV introduced as the Levante in Paris

The 2012 Paris Motor Show has introduced the European auto show crowd to the Maserati sport utility vehicle based on the Jeep Grand Cherokee that made its “production form” debut at the 2012 Detroit Auto Show but the ute on display right now has shed the awkward Kubang name used in Detroit – instead turning to the new name of the Maserati Levante.
Advertisement

We have known for some time now that there would soon be a Maserati sport utility vehicle based on the same chassis that is at use in the current Jeep Grand Cherokee and the Dodge Durango but rather than going with the Kubang name that the Italian luxury sport brand has used in the past, the production version will use the name Levante. While Kubang reportedly meant SUV in Italian, the name Maserati Levante has a far more fluid, friendly ring to it than the conceptual moniker. For those wondering, the Levante derives its name from the Via Emilia Levante – a street in Bologna Italy where the Maserati brothers first discussed the possibility of building the car company that still bears their name today.

The new Maserati Levante is expected to arrive in production form in 2014 with these new luxury SUVs being built at Chrysler’s Jefferson North Assembly Plant where the Jeep Grand Cherokee and Dodge Durango are currently built. No solid information has been offered as to what we can expect in terms of the drivetrain but rumors suggest that the Levante will be powered by a 500 horsepower, twin turbocharged 4.0L V8 that will be familiar with Maserati fans. Originally, we speculated that the then-Kubang could be powered by a modified version of the Chrysler Hemi V8 offered in the Grand Cherokee and Durango but Fiat CEO Sergio Marchionne put those thoughts to rest when he proclaimed "If it doesn't have a Ferrari block, it isn't a Maserati.” That comment almost guaranteed that the Levante will be powered by a high revving Italian V8 but it will be interesting to see if the Maserati SUV uses a high tech Ferrari dual clutch gearbox or if a more conventional automatic transmission is used.

Finally, we can expect the Maserati engineers will perform the needed tweaks to the suspension and chassis of the Chrysler SUVs to ensure that the Levante will offer great handling without compromising the ride quality expected from a proper Maserati.

Another interesting discussion point centering around the 2014 Maserati Levante is whether it will only come with a high performance twin turbocharged V8 or if there will be a less powerful, less expensive and more efficient smaller engine option. The Chrysler Pentastar V6 engine architecture is already at use and well received in the European market and American market alike so even though it doesn’t have a Ferrari block, the Pentastar could serve as a strong yet fuel efficient entry level engine for the Levante. I personally would be surprised if the Maserati SUV dropped with only a single engine option but using the Pentastar may turn off some devout Maserati enthusiasts. Because of that, the Italian automaker might go with a smaller engine sourced from elsewhere in the company lineup but I would expect that there will be some sort of lower cost engine option.

The luxury sport utility vehicle segment is booming around the world so the Maserati Levante could play a big part in helping the Italian luxury coach builder reach their annual sales goal of 50,000 units – especially if the company does offer a variety of engine options that allow for lower cost models. These less powerful, more efficient and less expensive models would likely help the company to attract new buyers who can’t afford models like the Quattroporte or who need more versatility than is offered by the company’s current high performance car lineup.

Tesla Contemplates A New Strategy for China Retail even As Sales Boom
Jay Leno on Elon Musk & EVs: “I Think He Should Get ... Credit"
END_OF_DOCUMENT_TOKEN_TO_BE_REPLACED