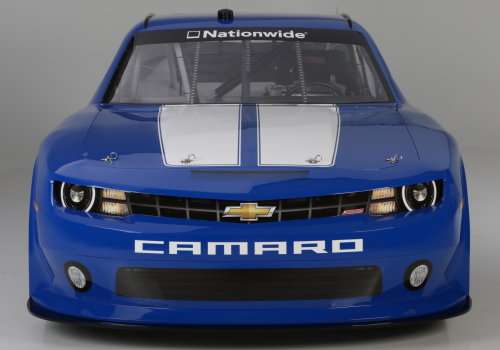 It's official: the Chevrolet Camaro is coming to NASCAR for 2013

Ford and Dodge have been running their respective muscle cars in the NASCAR Nationwide Series for over a year now but General Motors just announced that when the 2013 NASCAR season kicks off next February in Daytona – the NASCAR Mustang and Challenger will be joined by the Chevrolet Camaro.
Advertisement

When the Ford Mustang and Dodge Challenger were introduced for the NASCAR Nationwide Series in 2010, many race fans hoped that the Chevrolet Camaro would be soon to follow but at that time, General Motors stated that they didn’t plan to make a change from their insanely successful Impala. Once GM announced earlier this year that the Impala would be replaced by a brand new performance sedan (which we know now as the Chevrolet SS Performance), many NASCAR fans who had hoped for a muscle car shootout in the Nationwide Series pretty much gave up hope but today – GM has shaken up the NASCAR world with the announcement that they will indeed use a new Camaro stock car for NASCAR Nationwide Series competition in 2013.

“Chevrolet is proud to bring the Camaro to the NASCAR Nationwide Series in 2013,” said Jim Campbell, vice president, Chevrolet Performance Vehicles and Motorsports. “The Camaro Nationwide race car incorporates many of the distinctive styling elements of the production Camaro, including the unique power-bulge hood and deep recessed grille. In addition, the design incorporates the distinctive halo light rings and dual-port grille appearances, and the gold bowtie.”

Once the Chevrolet Camaro arrives in the NASCAR Nationwide Series in 2013, NASCAR fans who have been wishing for a shootout between America’s muscle cars (albeit in very different form from their street versions) will finally get their wish. The new restrictions which have allowed Ford to run the Mustang and Dodge to run the Challenger will allow General Motors to bring out the new Camaro stock car with a personality of its own. However, we can expect that under the skin, the new NASCAR Camaro will be pretty much identical to the current Nationwide Impala and the upcoming Sprint Cup Chevy SS. However, when it comes to high performance name recognition, Chevrolet is keen to getting in on the action of showcasing their mighty muscle car in the most popular form of auto racing in the US.

“Our team of Chevrolet designers and aerodynamic engineers did a fantastic job capturing the great looks and styling cues of the production Camaro, while providing our NASCAR Nationwide teams with a highly competitive aero platform,” said Pat Suhy, manager, Chevrolet Racing Oval Track Group. “For the remainder of 2012, our engineers will be busy working with our Chevy teams on wind tunnel and on-track testing to fine-tune the car in preparation for next year. It will be great to see Camaro compete on the track against its showroom competition starting with the 2013 season opener at Daytona.”

Not only will the addition of the Chevrolet Camaro to the NASCAR ranks be great for GM, as they will be able to show off their most popular performance car in a new, ultra popular venue – but it could also be good for NASCAR. When Ford introduced the Mustang to the Nationwide Series, it attracted a new group of fans who were not so much NASCAR fans as they were Mustang enthusiasts. These folks love the Mustang and tune in to the NASCAR Nationwide Series races with the hopes of seeing the same performance car that they love and drive every day beating up on the competition from Dodge, Chevrolet and Toyota. Similar new fans were brought into the fray when the Dodge Challenger arrived in the NASCAR ranks so, with the Chevrolet Camaro being the top selling American performance car each of the past two years – there is a good chance that the new NASCAR Camaro could attract Camaro enthusiasts to the Nationwide Series when the new car arrives next February in Daytona. Not only can Camaro, Mustang and Challenger enthusiasts watch the “same car” that they drive every day compete on the NASCAR circuits but now they can watch their favorite muscle car tackle the same nemesis vehicles that enthusiasts face in the real world. Mustang enthusiasts, Challenger (and Mopar) enthusiasts and Camaro enthusiasts will now have one more measuring tool by which to rank the top muscle car. After spending a Friday night at the local drag strip in their Mustang, Camaro or Challenger battling against other modern muscle cars, enthusiasts will be able to tune in to the Nationwide Series events in 2013 on Saturday with the hopes of seeing their “team” win on the NASCAR Circuit as well.

While the NASCAR Nationwide Series will offer an awesome clash of the muscle car titans starting next year, the NASCAR “big leagues” - i.e. the Sprint Cup – will still rely on stock cars based entirely on sedans. Ford will feature the new Fusion race car, Dodge will use their new Charger race car (provided that they find teams to drive them) and Chevrolet will use the new SS Performance sedan as the basis for their Sprint Cup cars.