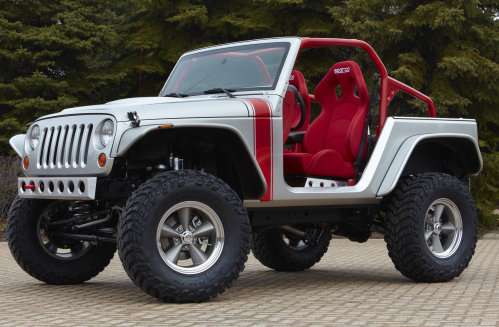 The Jeep Wrangler is known for its off-roading capacities bolstered by its lightweight but when you start adding accessories and optional items, the topless Jeep can get heavy in a hurry so Mopar has “trimmed the fat” with the Wrangler Pork Chop for the 2011 Easter Jeep Safari.
Advertisement

Mopar began by removing a great many of the heavier standard Wrangler components from the Pork Chop like the doors, tailgate, bumpers, carpeting and sway bars. With the tailgate removed, the engineers went to removing the attaching hardware for the tailgate followed by making a custom rear end with the taillights integrated into the smooth, production-looking rear panel. In the absence of the tailgate and spare tire carrier, the spare has been moved into the rear seating area which, needless to say, does not have a rear seat.

Next, Mopar fabricated a custom lightweight roll cage that worked with the new windshield that has been cut down by 2 inches. In place of the stock bumpers is a set of lightweight front and rear aluminum units from Hanson Bumpers and a prototype aluminum and carbon fiber hood has been provided by QMC. The exterior was finished with a set of lighter-than-stock fender flares and mirror relocation brackets and in addition to the spare tire, the interior has been enhanced with a set of Sparco reclining race seats.

Mopar then turned to the drivetrain with help from Gale Banks, who provided a set of long tube headers and a duel exhaust system with an integrated H-pipe to help the Wrangler breath better, working in conjunction with a Mopar Cold Air Intake. A smaller (and lighter) 20-gallon fuel tank and evaporative canister from a 2012 Fiat 500 help to remove more weight and when Mopar was done, an astonishing 850 pounds had been shaved from the Wrangler Pork Chop.

The result is one ultra-light Jeep Wrangler Pork Chop, sporting a great look in a form that is even more capable due to the extreme weight reduction. The new Wrangler Pork Chop will make its public debut at the 2011 Easter Jeep Safari on April 16th in Moab Utah.

Check out the links below for more Chrysler news and stay tuned to TorqueNews.com as we bring you more of the vehicles of the 2011 Easter Jeep Safari.
Mopar builds the Hemi-powered Jeep Wrangler Renegade for Moab
The Easter Jeep Safari special show vehicles are announced
Chrysler unveils the Ram 1500 Express
Chrysler alters production at Charger/Challenger, Fiat 500 plants due to Japanese crisis
Fiat could increase stake in Chrysler within weeks