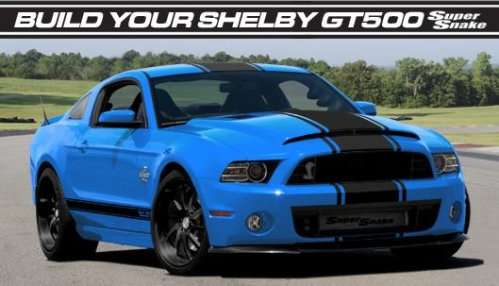 The folks at Shelby American have just announced the details for the 203 Ford Shelby GT500 Super Snake – an extreme performance version of the production Shelby GT500 Mustang – with the new Super Snake being the most powerful Shelby Mustang production model ever offered.
Advertisement

First of all, the biggest news is that the 2013 Shelby GT500 Super Snake starts with the 662 horsepower supercharged V8 but an upgrade to the Shelby/Ford Racing supercharger package helps the power output to skyrocket to a stunning 850 horsepower. That makes the 2013 GT500 Super Snake the most powerful package ever offered for the Mustang from Shelby with the only vehicle ever produced with more power being the incredible Shelby 1000 (which was a 1-off design). However, those new Super Snake buyers who don’t think that they need 850 horsepower can opt for the standard engine with “only” 662 horsepower and 631lb-ft of torque – which comes with an $11,000 price cut over the 850hp Super Snake. All of that power is sent to the rear wheels via a close ratio 6-speed manual transmission and a 3.31 rear differential ratio (a 3.73 rear diff is also available).

"When Ford launched the 2013 Shelby GT500, we were bombarded with requests for Shelby American to offer a Super Snake package for the car," said John Luft, president of Shelby American. "Our team worked closely with Ford Racing and other key partners to develop our new fire breathing snake. The result is the most powerful base model Super Snake ever at 662 horsepower, which is available at prices lower than previous models. By checking off a few boxes in the series of optional equipment, you can take home a street-legal 850 horsepower version that runs on pump gas."

Whether or not the new 2013 GT500 Super Snake Mustang is fitted with the 850hp supercharger upgrade, it comes with a wide variety of upgrades to improve the overall performance of this sleek muscle car. The Super Snake package begins by adding an upgraded suspension system that helps to handle the output and improve the cornering ability of the GT500. Next, a Shelby /Wilwood brake setup with 6 piston fronts calipers and 4 piston rear calipers clamp down on massive cross drilled/vented rotors with high performance brake pads. Helping to keep these beefy front and rear brakes nice and cool are brake cooling ducts mounted in the front fascia and behind the door in the side scoops. Also, regardless of which engine output package has been selected, the 2013 Super Snake features a Shelby high performance cooling package with a larger radiator, a larger heat exchange and aluminum cooling tanks. The 2013 GT500 Super Snake also packs a unique Shelby/Borla exhaust system that allows the Super Snake a proper roar.

On the outside, the 2013 Shelby GT500 Super Snake adds a unique hood with the classic Super Snake hood design, the familiar Super Snake side and top stripes, new 20”, 10 –spoke lightweight aluminum Shelby rims wrapped in high performance tires and unique Shelby Super Snake badging on the side and rear of the vehicle. Inside, the 2013 Super Snake features Shelby signature embroidered headrests, floor mats and badging which includes a serialized dash plaque. Buyers can also opt for a Katzkin leather upgrade package that allows the owner an incredible measure of customization of the front seats.

Another exciting aspect of the 2013 Ford Shelby GT500 Super Snake is the level of customization available. The Super Snake is available as either a coupe or convertible in 8 exterior color options - Ebony Clearcoat, Deep Impact Blue, Performance White, Ingot Silver, Sterling Gray, Race Red, Red Candy and Grabber Blue (shown on the right) with a variety of stripe colors including black, white, silver and blue. The unique 20” wheels can be ordered in either bright silver or satin black and for the first time, buyers can opt for a widebody package that allows for unique 14” wide rear tires to fit safely.

"The Shelby GT500 Super Snake has been the big dog of the Shelby American lineup," added Shelby American Vice President of Production Gary Davis. "With Ford's new 2013 Shelby GT500 having 662 hp right out of the box, along with our new wide body putting 14 inches of rubber on the ground, this car will be a game changer when it comes to power to the pavement performance."

The 2013 Ford Shelby GT500 Super Snake Mustang post title package carries a starting price of $28,995.00 for the 662 horsepower version while the 850hp package starts at $39,995.00. These prices do not include the price of the GT500 needed to build the Super Snake but thanks to the Shelby American “Build Your Own” page, we can see exactly how much these awesome super muscle cars will cost. My dream Shelby GT500 Super Snake (shown above on the right) is a Grabber Blue Coupe with black stripes and black wheels which carries a base price of $83,199 including the base price of the GT500. When I added the 850 horsepower supercharger package (+$11,000), the Shelby/Eibach adjustable coilover suspension package (+$975), the Watts Link Billet aluminum rear suspension package (+$1,995) and the unique Interior Upgrade Package (+$2,995), the final price of my ideal 2013 GT500 Super Snake sits at $100,164. You can click the link below to go build your own 2013 Shelby GT500 Super Snake on the Shelby American website via their build page – which is a fun little tool for those of us who are simply dreaming. As you pick custom options, the picture reflects those changes so you can customize the exterior of the Super Snake to see your dream car.

The bad news is that only 500 examples of the 2013 Shelby GT500 Super Snake will be built so if you are interested in having an awesome piece of American muscle car history, contact Shelby American right away to place your order. The new Super Snake package is expected to make its public debut at the upcoming Barrett Jackson auto auction in Las Vegas which begins September 27th.