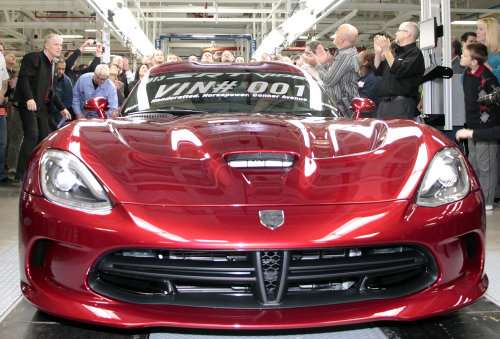 Almost exactly a year after the 2013 SRT Viper was introduced at the 2012 New York International Auto Show, the first batch of new Viper coupes produced are on their way to their new homes by means of Dodge dealerships all over North America – with the vast majority staying right here in the USA.
Advertisement

The very first 2013 SRT Viper produced was the Stryker Red Tinted Pearl VI #001 that was auctioned off at the Barrett Jackson Auto Auction to benefit pediatric cancer charity the Austin Hatcher Foundation. That car went to the winner bidder, Steve Thomas of Oklahoma, for the price of $300,000 and while that car rolled off of the assembly line back in early January – the lengthy quality control process delayed the delivery of the first batch of new Vipers. According to the Detroit News, there were approximately 140 new Vipers sitting at the Connor Avenue plant in Detroit until the quality control processes were complete but now that things are all squared away with the first production run, all of those cars are gradually being shipped to dealerships around North America. Click here for a look at the piece celebrating the production of Viper #001 in January.

After 2013 SRT Viper #001 went to Steve Thomas’ dealership of Tomball Dodge in Tomball Texas, SRT President Ralph Gilles was the second name on the list to take delivery of his new Mopar supercar. Gilles picked a white Viper, stating that white is “easy to maintain, doesn't show any scratches, looks good for years.” The top dog at the high performance Street and Racing Technology brand took delivery of his 2013 Viper on this past Tuesday, driving it about 30 miles before tucking it away safely in his garage so that he could fly off to the Big Apple for the ongoing 2013 New York International Auto Show. Luckily we would imagine that Ralph Gilles is now back in the Motor City area, where he and his new Viper are greeted by mid 50 degree weather and clear skies…so Ralph will have an awesome weekend to show off the new Viper and log some miles on the stunning supercar.

I do find it interesting that the company has now delivered two specific 2014 SRT Viper coupes and neither of them were fitted with the unique Launch Edition package. That limited edition package comes in Viper Blue with white stripes and unique wheels – a configuration that will not be offered beyond the limited run of the Launch Edition models. If I were in the market for a new Viper, I would most definitely jump on one of the blue Launch Edition units but with Mr Thomas buying Viper #001 in the same Stryker Red that was on the car at last year’s New York debut and Mr Gilles most likely leaving the limited edition Launch Edition models to the collectors – we will have to wait a bit longer to see those blue and white Vipers on the street. Provided, of course, that the people who buy the Launch Edition Vipers actually drive them.
So far, more than ten trucks packed full of 2013 SRT Viper stock have left the plant. While you might think that a truckload of Vipers would be an awesome sight to see – you shouldn’t spent too much time riding around Detroit looking for these trucks as the Vipers are being transported in closed trailers unlike the normal open trailers used to ship average cars and trucks.

In total, the first 800 examples of the 2013 SRT Viper will be delivered to dealerships around North America with most of those (no exact figure is available right now) bound for approved US SRT dealerships. Ralph Gilles has said on multiple occasions that he expects to see around 1,800 new Vipers sold this year and while that might seem like a very low figure, it should be kept in mind that the Viper is completely hand built and at full capacity, Connor Ave can build around 14 cars per day.