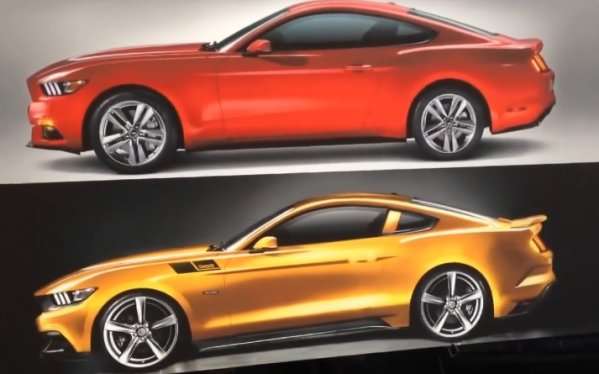 This past weekend at a small gathering at the company headquarters in California, the newest look at the 2015 Saleen Mustang was shown off and thanks to one fan who recorded the unveiling of this new image – everyone who didn’t make it to the Saleen HQ gets to see the next generation Saleen Mustang as well.
Advertisement

Back in early July, Steve Saleen offered up the first look at his brand’s take on the 2015 Ford Mustang, but we only saw it directly from the front. That first image showed a S550 Mustang that is far more aggressively designed, but some critics felt that it looked too much like the Camaro. Regardless of what the naysayers think of the 2015 Saleen Mustang, there is no question that it is a stark difference from the factory production 2015 Mustang and honestly – I like it. Now that I have seen the Saleen Mustang from the side, I like it even more.

The Side View of the 2015 Saleen Mustang
When we got our first look at the 2015 Ford Mustang reimagined by the folks at Saleen, it was clear that they had made some major changes across the front end. The new side view shows that Saleen changed far more than just the face of the next generation Mustang.

First off, it appears as though the Saleen front fascia extends out a little further, with more of a rounded design that reaches out away from the headlights more than the production 2015 Ford Mustang. Also, that aggressive Saleen hood appears to have more of a raised cowl design than the “normal” Mustang, but that it very subtle relative to the other changes.

Along the side, the unique 5-spoke Saleen wheels fill the wheel openings perfectly and, based on the ride height, I would guess that this car has a unique suspension package that improves handling and lowers the car by a noticeable amount. There is also a vastly more aggressive lower side sill with what looks to be a carbon fiber trim piece giving the car an even lower look between the wheels and while it is subtle, the addition of the painted b-pillar adds a little extra flare to the side view of the new Saleen Mustang.

Finally, we can get a bit of a look at the rear end of the 2015 Saleen Mustang in the side shot and, based on what is available, it appears as though there will be significant sculpting changes out back. It looks like there is probably a carbon fiber lower diffuser that extends up into the middle portion of the rear “bumper” and I would fully expect to see some big, noticeable exhaust poking through that angular rear end.

The 2015 Saleen S302 Mustang Previewed
When the 2015 Ford Mustang turned Saleen S302 arrives in the flesh, I expect to see it follow the same basic model line layout as the 2014 Saleen Mustang packages. This includes some “entry level” packages that include the Saleen look and the handling goodies while the higher end models will almost certainly feature forced induction and monster power. With the 2015 Ford Mustang GT packing 435 horsepower, I would expect the lower priced Saleen Mustang to have somewhere in the area of 450-460 horsepower while the top of the line models could pack enough power to challenge the mighty Hellcat Hemi in the hew SRT Challenger.

Hopefully we won’t have to wait too long before finding out everything that there is to know about the 2015 Saleen Mustang and if Mr. Steve Saleen does plan to keeping us all waiting a bit longer – here’s hoping that he at least offers up some more teasers soon as I am loving the look of this new Saleen Mustang.

Props to Mustang Medic on YouTube for capturing these images. The full video of the presentation is available below. Click here for a look at the controversy over the Camaro-like design of the Saleen Mustang front end.