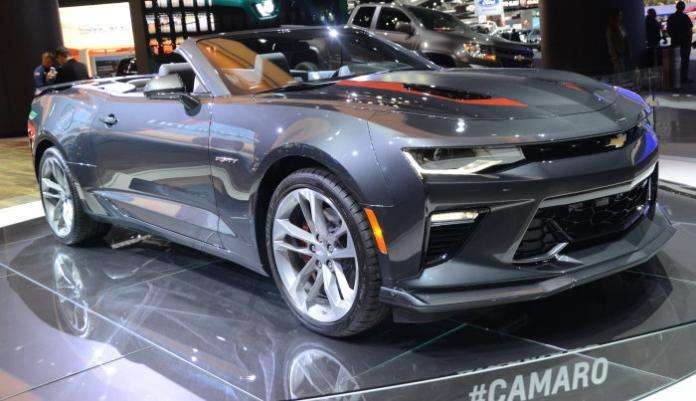 A new report claims that the Holden Special Vehicles group is planning to import the 6th gen Chevrolet Camaro to Australia and convert it to the right hand drive configuration which is required Down Under – giving GM high performance fans a chance to finally get ahold of the legendary Chevy muscle car.
Advertisement

For many moons, Australian performance car buyers who wanted to go fast in a GM product have opted for the Holden Commodore - a rear wheel drive, four door sedan packing comparable V8 power to the high performance Chevrolet products sold in the US. However, the Commodore as the Aussies known and love it – with a rear-drive platform and a big, American V8 – is officially dead and the replacement is basically what Americans know as the Buick Lacrosse, with a front-wheel drive chassis, available all-wheel drive and a V6 engine.

In short, when the 2018 Holden Commodore arrives in Australia, it will be a far cry from the Commodores of old, and that has Aussie GM fans quite upset – understandably. They are essentially losing what Americans known as the Chevy SS high performance sedan and in its place is the Buick Lacrosse.

Fortunately, the Holden Special Vehicles division and their parent company – the Walkinshaw Group – have reportedly made a deal with General Motors to ship 6th generation Chevrolet Camaro coupes and convertibles to Australia where they will be converted to right hand drive for local use. The only real downfall is that the Camaro SS in Australia could cost around $90,000 AUS.

6g Camaro SS Down Under
When General Motors introduced the 6th generation Chevrolet Camaro, it was expected that they would offer up a right hand drive model for those models which require that layout. With the Ford Mustang being launched globally with a RHD option, it seemed to make sense that GM would outfit the new Camaro to battle the Mustang on a global level, but shortly after the 6g Camaro was introduced, GM made it clear that there were no plans to build right-drive cars for export.

Understandably, GM fans in Australia were disappointed at that news, but their frustration likely rose to the next level when it was announced that the current RWD/V8 Holden Commodore would be replaced with an AWD/V6 Buick wearing the Commodore name. While Ford fans had finally gotten the Mustang, Chevy fans Down Under were losing their performance car without any proper replacement being offered, but there is newfound hope from the folks at Holden Special Vehicles (HSV).

According to the Australian publication Motoring, HSV and their parent company the Walkinshaw Group are working on a deal with General Motors which would allow them to buy the 6g Chevrolet Camaro SS from the US. The cars would be shipped to Australia and converted to right hand drive so that they could be sold at local Holden dealerships.

The downside to this program is that with the cost of shipping and conversion, the Aussie Camaro SS is expected to cost somewhere in the area of $90,000 AUS ($71,400 USD). On the other hand, the new Ford Mustang GT which is built with the right-drive layout in the US and shipped to Australia has a starting price around $58,000, so the Camaro SS will likely cost far more than the Mustang GT with which it closely competes. Mind you, the price of $90,000 is dependent on GM selling HSV the Camaro at a discounted price, otherwise Aussie buyers could be looking at a price in the area of $140,000 AUS, but Motoring reports that the American GM execs seem to be on board with this program, so there is hope that the Camaro SS will soon be available with the proper right hand drive layout and a price under $100,000.

Carl Kelsen wrote on September 7, 2017 - 2:29am Permalink
HSV needs to be thanked for their efforts to finally see the Chevrolet brand officially return to Australia. It has been 48 years since GMH dealers in Australia last sold Chevrolets. By early 1970 Australian GM dealers could only sell a single brand being the Holden. Prior to 1970 your local GMH dealer could sell you a new Pontiac, Chevrolet, Vauxhall or even a Bedford truck! Of course if GM-Holden wants to call the Chevrolet Camaro and or Chevrolet Corvette a Holden then perhaps we will not see the return of the highly regarded Chevrolet brand. However calling a Chevrolet Camaro a Holden Comaro makes no sense to me and this happens there is going to be a big market for replacement Chevrolet badges. The simplest way for GM is to simply kill off the Holden brand and sell the Chevrolet brand globally. The way forwad for GM in Australia is simple. CADILLAC for the premium market. CHEVROLET for the mass market. The Chevrolet brand must replace Holden.