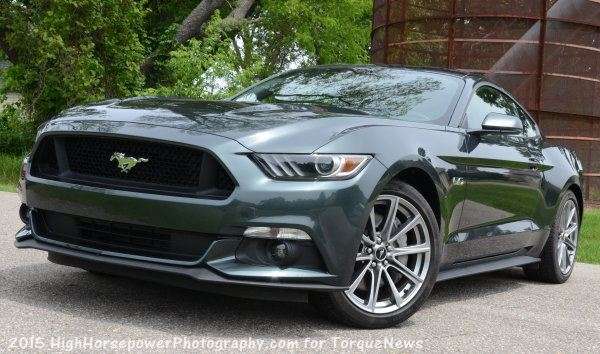 How Will the Future Ford Mustang Get Greener?

While the 2016 Ford Mustang is the most efficient lineup ever, the constant push for better fuel economy figures has many people wondering how the industry’s longest-running muscle car will continue into the future, so today we look at the possible options for the Mustang to continue thrilling drivers without killing Mother Nature.
Advertisement

Before getting into looking at the super-efficient future options for the Ford Mustang, I want to point out that this is purely speculation based on the direction of the auto industry. I believe that we will be able to buy a Mustang GT with a high performance V8 engines well into the foreseeable future, even with tougher fuel economy requirements ahead. However, with new high performance cars packing diesel, electric and gasoline hybrid drivetrains - I think that there could be a Mustang with something other than a straight gasoline engine a decade or more down the road.

Because of that, I doubt that we will see a diesel powered Ford Mustang in the next decade.

Electric Mustangs
The Tesla Model S has seemingly proven that you can have a car that runs purely on electric power that has both true high performance capabilities and functional daily driving range. The issue is that the technology in the Tesla Model S makes it more expensive than many luxury cars sold in the US. Adding a Tesla-like electric drivetrain to the Mustang would make for one very expensive muscle car while fitting all of the electric bits into the chassis of a Mustang without destroying the weight balance might create a difficult challenge.

The good news on the electric front is that battery technology is constantly improving and with those improvements, we see a general decline in the overall cost of electric propulsion technology. Also, with these advancements comes the continued downsizing of the electric drivetrain components, so over time, we should see the batteries and drive units weight less and take up less space.

While a Ford Mustang would be a cool option for some markets, the current limitations to all electric vehicles makes an all-electric Mustang very impractical right now. For an electric Mustang to make sense for both Ford and the buyers, the industry will need to make some massive breakthroughs to reduce battery size, weight and cost by a tremendous amount.

Hybrid, Like a Supercar
Two of the fastest and most powerful performance cars sold in the world right now are the Porsche 918 and LaFerrari. What do these two cars have in common?

They are both powered by gasoline-electric hybrid drivetrains.

LaFerrari is powered by a 6.3L V12 paired with their hybrid KERS system for a total drivetrain output of 950 horsepower. The Porsche 918 is powered by a naturally aspirated 4.6L V8 mated to a pair of electric motors that work together to provide 887 total horsepower.

These two European hypercars make it clear that a gasoline-electric hybrid can offer incredible performance, but they are also both very, very expensive. The Porsche with a V8 engine and the hybrid drivetrain starts at $845,000, but for the basic sake of discussion, a similar drivetrain in a Ford Mustang GT wouldn’t lead to a Mustang that costs $845k. Ford has the most advanced hybrid program of any American automaker, serving as one of the two top dogs in the American hybrid segment with Toyota.

Were Ford to develop a smaller yet similar electric drive system to that in the Porsche 918, applying it to the Mustang GT, the Motor Company could very easily have a 500+ horsepower Mustang that still packs V8 power and V8 sound – while also offering superior fuel economy to the current 435hp Mustang GT.

The issue with this idea continues to be the size, weight and cost of hybrid drivetrain components and adding a system like the one in the Porsche or LaFerrari would drive the cost of the Mustang GT way too high. Fortunately, Ford’s constant work in the area of hybrid technology could most certainly yield a hybrid Mustang GT in the next decade that will maintain the American V8 while also offering incredible fuel economy.