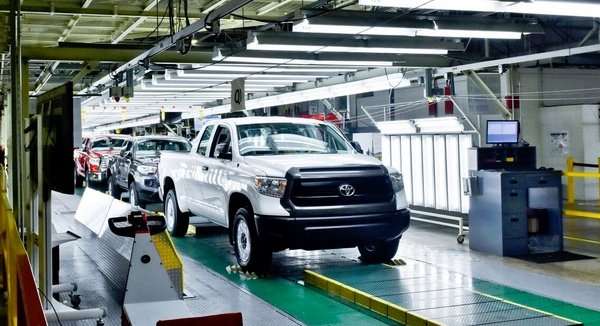 How Toyota Builds Almost Every New Truck in Texas

When Toyota broke ground on their truck plant outside of San Antonio Texas, critics insisted that it would be impossible for the company to make this location work – but Toyota has proven those folks wrong in a big way, building almost every truck sold in America in the Texas plant.
Advertisement

When Toyota announced that they were going to build a massive truck assembly plant outside of San Antonio, Texas, the concern from the critics was whether or not the Japanese automaker could build trucks in Texas. If you’ve never noticed, automotive manufacturing facilities tend to be located in clusters, which allows support companies and 3rd party suppliers to set up shop in those areas as well. It also allows the company to open a factory in an area where there is a high number of experienced auto factory workers.

For example, when an automaker opens a production facility near Detroit, that company knows that they will have access to an endless list of suppliers for every component that they don’t produce themselves as well as a long list of qualified individuals to fill every position in the plant.

With that in mind, there is a theoretical problem with building a plant in San Antonio, Texas, since there is very little support infrastructure, very few automotive suppliers and a much smaller pool of experienced workers.

An automaker can ship components from anywhere, but every mile in component shipping can add fractions of a cent to the cost of that vehicle. The critics insisted that this lack of automotive infrastructure would be too costly for Toyota, and they may have been right, but Toyota never had to worry about that.

Toyota didn’t just build an assembly plant – they built an automotive production campus of sorts, with various outside suppliers doing business on the same sprawling piece of Texas property as the Toyota assembly plant. In doing so, they created a job boom in the area and in addition to hiring from the surrounding area to begin with – Toyota has continued to promote from within as new roles for more skilled workers or lead positions open up.

Toyota effectively created an automotive infrastructure in the San Antonio area and to take advantage of that effort, they build both the Tundra and the Tacoma on the same assembly line at the same time – making TMMTX that much more impressive.

Assembly Line and Suppliers Share Walls
While Toyota was able to find and educate plenty of workers in the San Antonio area to run the production line at the TMMTX plant, the lack of nearby supplies was the biggest obstacle. To clear that hurdle, Toyota reached out to suppliers in other areas and offered them a chance to set up shop in an adjoining building on the Toyota Texas Truck plant. With these suppliers operating a smaller facility out of a building connected to the Toyota production buildings, there is a huge reduction in cost for both the supplier and the automaker.

One great example of a supplier doing business at the TMMTX facility is the company that makes the seats for the Toyota Tundra and Toyota Tacoma. Seats for trucks are heavy and bulky, so shipping them would be very expensive. Rather than incur the cost of shipping the seat to the factory or building the seats themselves, Toyota brought the supplier who makes the seats into the Texas production facility. As a result, every seat for the Tundra and Tacoma is built right next to the building hosting the production line and in some cases, there is a turnaround time of just 50 minutes from the time when Toyota orders the seats to the time when the seats are ready to be installed along the assembly line.

That quick turnaround and removal of shipping costs allows Toyota to build the Tacoma and Tundra in a cost effective manner, while also creating a new automotive supplier community in San Antonio. These companies are located at the Toyota plant in order to be able to supply Toyota in a hurry, but these smaller companies are still free to do business with other local companies.

Local Manpower, Promoting from Within
In addition to the basic assembly line area and the many supplier out-buildings, the Toyota Texas truck plant also has a state of the art paint shop. Like many aspects of production, the painting process is heavily automated, but there are still a few jobs which require the skilled hand of a real, live worker. Specifically, each Tundra and Tacoma has body sealant that is similar to the caulking around your bathtub and a few portions of the body which have to be painted by hand rather than by a machine. Instead of opening up the hiring process to folks outside of the plant, current workers are given the chance to learn the body sealing and painting skills, so when the company needs to fill these skilled positions – they can promote someone from another spot in the facility.

While there were some workers who came to build trucks at the Toyota Texas facility, the company went to great lengths to open up as many jobs as possible to local workers. Since the plant opened back in 2003, local workers have had the chance to move up within the plant through a variety of training programs and as workers move up the ladder, new entry level positions open up. Along those same lines, Toyota offers a variety of youth hiring programs and higher education programs – giving their workers a chance to learn all sorts of new skills while becoming more valuable employees for Toyota.

There may not have been a great many skilled automotive production workers in the San Antonio area back in 2003, but 13 years later, the facility has more than 2,600 workers building Toyota Tundra and Tacoma pickups as quickly as possible.

In addition to learning the automotive production skills, workers at the Texas Toyota truck plant have the interesting challenge of building the Tundra and Tacoma on the same line, at the same time. Lots of plants build multiple vehicles at the same time and some plants build different vehicles on the same physical assembly line, but few companies build two completely different vehicles at the same time on the same line. While touring the plant, we got to watch as the crew hustled to build an endless stream of new Toyota pickups, and along the way, there was a very random mix of Tacomas and Tundras. Because of this, every assembly worker has to be familiar with every step of production for both vehicles, while being able to quickly transition from one to the other and back again.

If you just look at the Toyota Texas truck plant with the assembly line buildings and the paint shop, it is an impressive, state of the art facility. When you factor in the suppliers clustered around the production buildings in their own, smaller shops along with the training effort turned in by Toyota to educate a huge community of auto workers – the Toyota Texas truck plant is truly one of the most impressive automotive endeavors in the United States.

Toyota went into an area with no real automotive infrastructure and they created enough of an automotive community to build two of the most popular trucks sold in America, with more than 200,000 trucks built each year – all with workers drawn from the local community and trained by Toyota to be skilled in many different positions within the business.

The critics who questioned Toyota’s decision to build a huge truck plant in an area without any infrastructure had a good point, but Toyota solved the supplier and manpower issue by training an entire workforce and bringing suppliers nearly inside of the plant.

Steve wrote on November 16, 2016 - 5:48pm Permalink
Toyota located this plant in remote area so they can pay a low wage and run it with non traditional work schedule. So they have maximum profit from the most profitable vehicle. And also the supplier chain the needed is across the border in mexico so it's technically still somewhat local.
Danny Stone wrote on November 24, 2018 - 4:35pm Permalink
Is there any way that I could talk to someone about seats in my 2018 Toyota Tundra I would really like it

LG's New EV Battery Plant Is a Welcome News for Tesla
Tesla Giga Berlin's New Hurdle: It's Not Only the Gov't, but Now Tesla Itself
END_OF_DOCUMENT_TOKEN_TO_BE_REPLACED